It was named after the remarkable INS Vikrant aircraft on account of using its invincible metal. The bike is really different from the others as it is an epitome of patriotism and that’s the best in itself. Moreover, the roadster has filled with just a right amount of styling and features to grab the eyeballs. Apart from the completely new design, the motorcycle has also come up with new engine, which can perform very efficiently even at low rpm.

It could be one of the best competitors for other bikes in the segment if looks does not count to be the most subjective thing as it acquires completely tedious profile from the front, while the rear profile looks great that is integrated with a LED tail lamp as well as adorned by chrome touches.

It carries a 149.5 cc, four-stroke, air cooled DTS-i engine to pull the bike with a maximum power of 11.76 bhp at 7500 rpm along with a massive torque of 13 Nm at 5500 rpm. To send the power at the rear wheels, the engine is also mated with a 5-speed transmission box. With these configuration, the bike is claimed to be go around 60 km in just 1 liter as well as can hit a top speed up to 109 kmph.

In order to take you away from the potholes and eliminating vibration, the automaker has offered telescopic suspension with 33 mm regular forks for front wheel. In addition, gas charged shock absorber and twin hydraulic springs are also added at the rear end along with 120 mm sporting tyres. Moreover, the shorter wheelbase is there for comfort ride at off road, while the uplifted handlebar will allow you to ride more confidently.

The vital breaking responsibility is going to be taken care of by wave pattern disc brake up front and drum pattern at rear. Yeah! You are definitely going to miss the ABS and CBS in this bike, but, the above said features will never let you down.

If you are looking for a much powerful and versatile bike yet an affordable one that can proficiently perform all your regular duties, then you can give a shot for it. In the price bucket of INR 63,001, Bajaj V can be an economic choice that offers you a better fuel mileage along with average kind of looks. 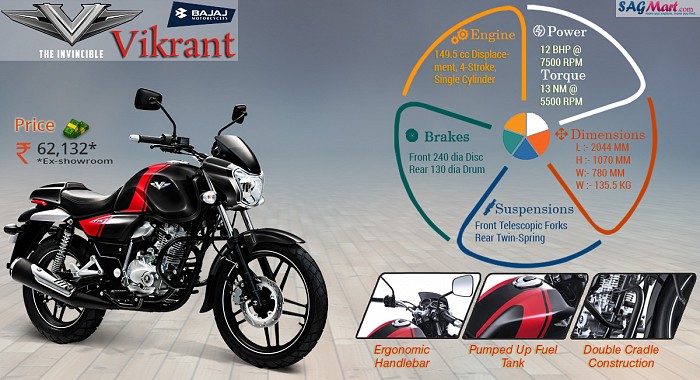 Other Models of Bajaj