The Italian bike maker, Ducati brings a large displacement Superbike to Indian enthusiasts with increased accessibility. It is made to give throttle response and high performance on all Indian terrains. It comes with latest updated design and advanced powerplant.

The Ducati 959 Panigale is an entry-level sportbike for the Italian manufacturer. It is following the similar design philosophy of the older Panigales though is compact and sleek in shape. The motorcycle looks achingly beautiful with components like distinctive sleek headlights, fairing, tail unit arcs over, tails lamps and more.

Behind the fairing that does not cover the engine completely, is a 955cc 90° desmo V-twin engine with 8-valve DOHC. With the liquid cooling and fuel injection system, the said engine makes out 157PS and transmits to the rear wheel via a 6-speed gearbox with a slipper clutch. In terms of performance, the arrival of electronic allows new hands to access power levels. In the package, there are riding models with pre-selected settings and aids to adjust as per the rider’s suite. Along with the traction control has eight levels that’s pretty smooth when intervenes. The complete engine specs are as follows.

The Panigale 959 is just lovely at the corners. The feedback from riding position provided by the handlebars and seating helps in boosting confidence rapidly. While the Pirelli Diablo Rosso Corsas, as well as the suspension, allows leaning too far with great confidence. The chassis, on the other hand, keeps the bike stable at big lean angles. the 959 is smaller than the 675 Daytona that makes it much easier to handle in almost every condition on a mountain road or at the race track. The suspension setup that is adjustable at both ends is moderate on bad roads and to change settings one has to need of a screwdriver, a C-spanner and an Allen key. As it has three settings, the base set, a gentler road setting and a stiffer track setting.

The braking setup on the Panigale 959 is fantastic as other cycle parts. While braking, the bite is strong though not that effective well there is no dearth of power. Other than the braking setup, there is a brand patented 3 mode ABS. in the ABS3 setting, it controls both wheels and preventing lift. The ABS2 implies force on both wheels though not that intense while ABS 1 is race ABS that applies force only on the front wheel and no rear lift mitigation.

The Ducati 959 Panigale is a beautiful bike though there are a few issues like heating, riding ergonomics and the cost of ownership. For the heating, nothing can be done and one has to live with it. The cost of ownership, on the other hand, is also one of the issues due to the company bolts every on the engine and a wee monocoque makes working on the bike more complex. Consequently, the Thai-sourced CBUs, the 959 becomes expensive due to the services charges that are too high. 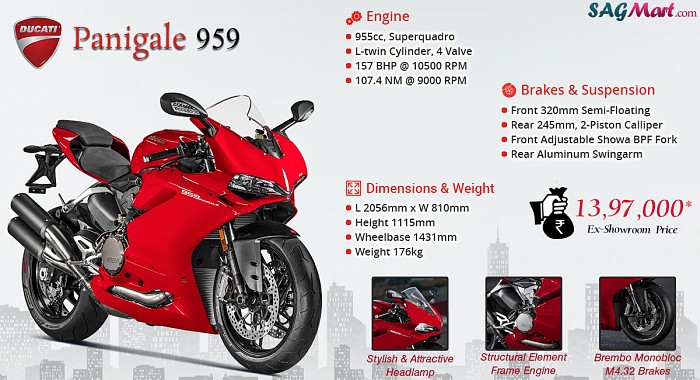 Other Models of Ducati