First time, the Chinese bike manufacturer, CFMoto is trying to enter in India by launching its products CFMoto 650NK with the collaboration of Eider Motors. The 650NK comes with a premium J.Juan brake package, Continental tyres, styling upgrades and an integrated tachometer. It measures with low 795mm seat height that gives a relaxed racing position. It also gets dual front disc brakes and a rear disc brake. The bike gives a comfortable riding as it is featured with Kayaba fork.

The CFMoto 650NK is a street-fighter motorbike having a typical naked bike styling, with exposed chassis and bikini fairing. The bike is featured with a neatly styled belly pen and a blackened stubby exhaust. The bike has various qualities to go on with it, some are…

The CFMoto 650NK has some issues in the headlight which comes out while driving in rain according to the past owners of the beast. As per the reports the high beam automatically turns on while driving in the rain which can annoy many people. Apart from that some of the bike owners said they have servicing issues with the company. Looks like after making so many efforts, the company still needs to works hard to make their customers satisfied.

The model comes with an attractive and comfortable handlebar which makes the front look of bike more charming. After that the bike has a low seat of height 795mm which helps in having relaxed riding position.

The Eider CF Moto 650 NK is a bike having a quality and number of safety measures which can give you a secure ride. The front wheel of the bike is featured with 300mm dual disc brakes with two-piston calipers and the rear wheel comes with a 240mm single disc with single piston. The bike comes with broader and more rounded edged tyres which provide you better grip on the road. It is suspended by 41mm KYB telescopic front forks and have a monoshock unit at rear end.

Having a superb engine, the bike has proved to be less maintenance required. But as this is also just a machine so small issues can happen. Still, the company needs to improvise its servicing part because the customers are not fully satisfied from the service. But, the company has just spread its footprints in the market and can have a little time to satisfy the customers completely.

The Eider CF Moto 650 NK possess a muscular body which makes it the boss on the streets. Having a powerful engine and attractive looks the bike can bring a smile to the customer. 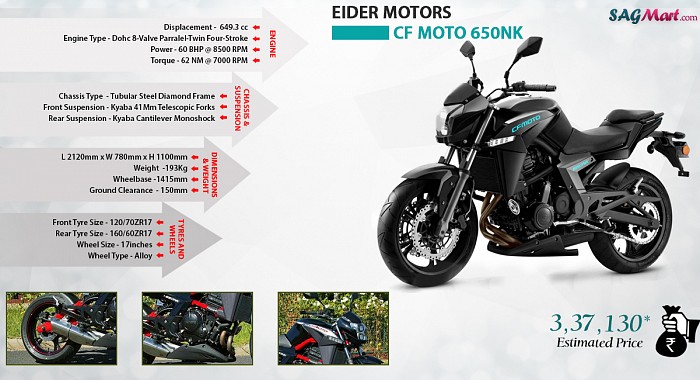