Honda is gearing up to launch a new generation of the CB Shine, named Honda CB Shine SP DLX. The motorcycle is featured with a new headlight,Chrome finish muffler cover and front disc breaking system. New CB Shine SP gives a attractive front look as it is incorporated with parallel patterned alloy wheels. It also receives new graphics and design in the bike body work.

The Honda CB Shine SP DLX gets an entirely fresh styling, which is an impressive approach by HMSI. This unique yet catchy design makes it distinct from the present product portfolio. Basically targeting the young bike enthusiasts, the automaker has focused more on the exteriors of the bike. The seat resembles same as the older variant having full length and a single couch, which is extremely comfortable to the rider.Top mileage claimed is 65 KMPL. Overall which is good. Technology-wise, the new analogue-digital instrument console equipped in the motorcycle is systematically arranged with dials and indicators. Defining below its pros:

As far as the inferior characteristics is concerned, there's hardly something which can be stated here. Though, a few we are mentioning.

The performance element of the bike is truly efficient and dynamic that what makes it different from the other motorcycles in the segment. Your rides become more zestful and lively via a 124.73cc, single-cylinder, air-cooled engine that generates 10.57BHP of power and 10.3NM of torque. Matched up to a five-speed gearbox, the Honda CB Shine SP DLX proclaims a certified mileage of 65 KMPL. Given next its power and mileage specifications:

By equipping CBS, the automaker has advanced the safety measure into the machine. Moreover, the braking tasks are duly supervised by 240mm disc brake at the front and 130mm drum at the rear, which lessen down the chances of accidents at high speeds. The tubeless tyres at both front and the rear end holds the grip and manages the sudden deflation. Front suspension comprises of telescopic forks up front and spring loaded hydraulic swing arm at the rear.

The Honda CB Shine SP DLX features an excellent handling, an electric starter and pillion grab rail, which makes the commuter an easy to handle bike. Besides, the full long seat gives enough space to sit and the rider can travel for long distances without having any discomfort.

By and large, the Hero CB Shine SP DLX is a perfect, budget-friendly bike that has got style along with the performance factor. Offered in five different shades, Honda makes it easy for the audience to decide according to their tastes. 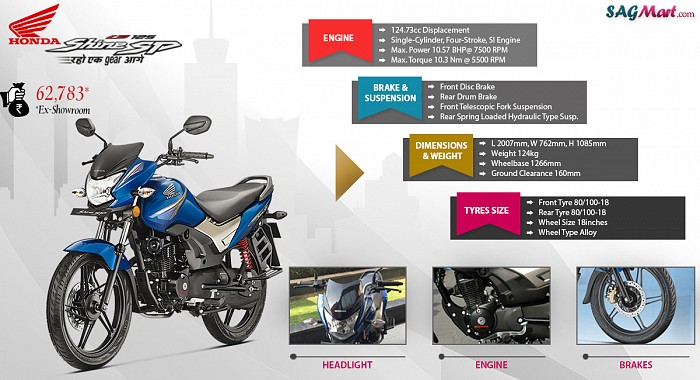