Versys 650 is a sports motorcycle which offers excellent handling and dynamic ride quality. It is a fun-to-ride motorcycle which is built on the lightweight and stiff chassis. The quarter liter-motorcycle is featured with an adjustable windscreen, twin headlight and split seat which make it a most versatile motorcycle among the sports motorcycles. Handling quality is very ample for a comfortable riding position, while the split seats have been made to offer a comfortable sitting position to the both rider and pillion.

The Kawasaki Versys 650 offers an aggressive look as it is featured with full fairing. It also gives quite impressive look as it comes with a wider air shield. We truly say that the bike looks sharp and massive as it gets an attractive exhaust positioning and comfortable seating position.

Well, the Kawasaki Versys 650 comes with a huge number of features and attracts the buyer. Some drawbacks decrease its plus points. The cons are mentioned below:

The Kawasaki Versys 650 is powered by a 649cc, twin cylinder motor that churns out a maximum power of 68.1 BHP at 8500 RPM and a peak torque of 64 NM at 7000 RPM. The powerplant is paired to a six speed gearbox. The bike offers a dynamic performance and off-road riding on every type of terrains as it houses with the liquid cooled and fuel injection engine. The firm claims that the bike can get the 1000 KMPH speed in just 5.10 seconds and go on a maximum top speed of 206 KMPH.

As like the other bikes from Kawasaki, the Versys 650 also made with the same thing that offers a smooth and comfortable riding. The bike is incorporated with wider handlebar and quite less weight (216kg) that are responsible to offer excellent handling power on the curves of the tracks.

The Japanese giant, Kawasaki loads high quality safety components in their products to avoid the numbers accidents. Kawasaki Versys 650 comes with dual semi floating 300mm petal disc at the front side, while the a single 250mm petal disc brake at the rear end. The bike offers a dynamic balancing power as it featured with an advanced setup of 41 mm inverted telescopic suspensions at front and offset lay-down single shock fork at rear. Few safety features are given below:

The Kawasaki Versys 650 comes with less maintenance parts. First valve inspection at 26,250 miles. The spark plugs should be changed every 7500 miles. The air filter should also be cleared after 7500 miles.

The Kawasaki Versys 650 is an awesome motorcycle to ride around the city. The bike looks more tall and imposing. You can get a better visibility in traffic as it comes with enough seat height for the average Indian rider. 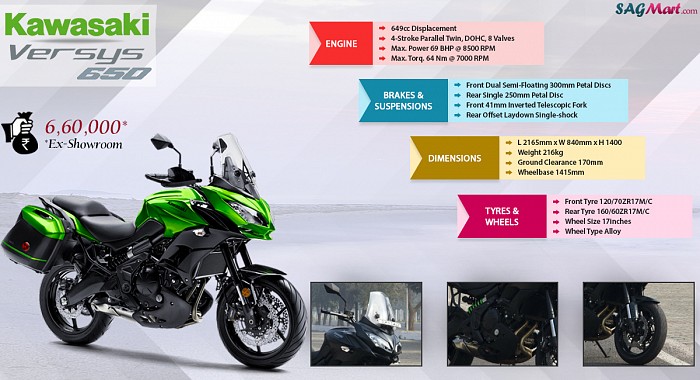