The newly launched MV Agusta F3 800 RC is a racing bike titled with ‘Supersport World Championship’. It comes with a combination of White and Red color which provides the enticing look to the motorcycle. Obviously, every bike lover gets attracted by its unique design. Popular bike Team Reparto Corse's F3 800 is the parent version of the road legal limited edition F3 800 RC. It also houses the AMG badge on all the 250 limited edition bikes.

Developed on an all new steel tubular Trellis frame and a single-sided aluminum swingarm which also sports in providing stunning look to the MV Agusta F3 800 RC Limited Edition, gets a 798cc three-cylinder engine which churns out 148bhp maximum power at 13,000rpm and 88Nm of peak torque at 10,600rpm. The transmission duties are being carried out 6-speed gearbox.

It features an ALS Steel tubular trellis chassis that has been redesigned with a new riding position and fuel tank fitting. At the powering front, the associated gearbox has also seen revivement that now offers better gear shifts and smooth lever operation. The presence of double floating disc and single steel discs at the front and rear respectively supplies precise braking on the go.

As far as safety is concerned, The MV Agusta F3 800 RC has been equipped with a host of safety features such as LED tail light, Adjustable 8-Level Traction Control & ABS, Brakes With Radial Front Callipers, Electronics And more. A list of safety features that would provide you a safer ride on the roads are mentioned below:

The MV Agusta F3 800 RC Limited Edition has been launched at 19.73 lakh in India (ex-showroom, Pune). At this pricing, it is a value for money bike as the motorcycle has an alluring design, powerful performance, safety features, and advanced handling and riding features as well. 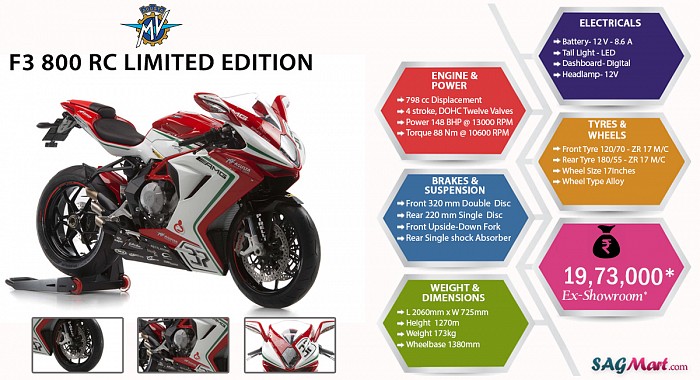