Suzuki introduced Intruder 150 bike in cruiser segment in India. The Intruder 150 is powered by 150cc coupled with the 4-stroke engine which gets maximum power of 14.8 PS and the maximum torque of 14Nm also include 5-speed transmission. The added features on the Intruder fully digital instrument cluster, larger seats, LED projector headlights and aerodynamics tank.

Suzuki Motorcycles recently launched 155 cc cruiser bike in India titled with Intruder 150 ‘India’s Modern Cruiser: The bike comes with a perfect combination of modern styling, performance, and features. Some of its highlighting features are:-

The newly launched Suzuki Intruder 150 is powered by a 154.9cc single-cylinder, an air-cooled engine will generate a maximum power of 14.8PS at the rate of 8000 rpm, whereas a peak torque of 14Nm at the rate of 6000 rpm. Transmission duties being performed by 5-speed gearbox. The motorcycle has a kerb weight of 148 kg and a fuel tank have a capacity of 11litre. The company claims that the bike is capable to give a fuel efficiency of 44 kmpl in rural areas. It is available in electric- start mode only. The Suzuki Intruder 150 power and mileage features are as follows:-

The Suzuki Intruder 150 comes with foot- pegs which offers a relaxed riding position to the rider. Suspension duties being handled by telescopic forks up at the front whereas monoshock unit serves a purpose at the rear. The bike has a split seat set along with pillion seat which provides comfortable riding to the rider. The bike has a smart digital instrumentation which looks like a smartphone. Activities being performed on the bike such as speed, petrol will display in the Smart digital instrumentation.

The Suzuki Intruder 150 loaded with maximum safety features. The seats are designed in such a manner which offers comfortable and stress-free ride to the rider. The Intruder featuring an ABS which controls the braking system efficiently and avoids wheel lock in the slippery road. Some of its features are mentioned below:- 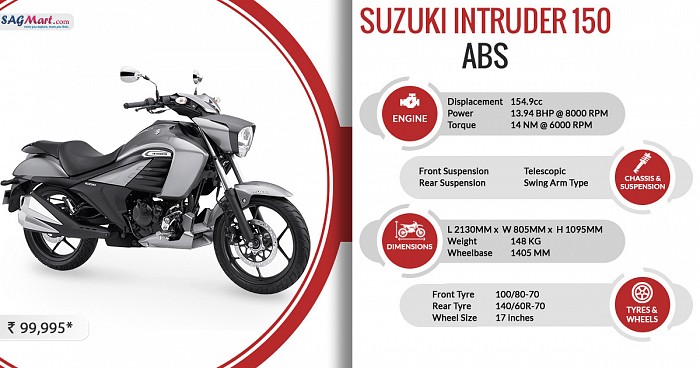