TVS Radeon is a new 110cc motorcycle in the available range of TVS commuters including the StaR City + and the Victor. The motorcycle wears an all-new body language with new stickers. Intended to serve both the young and old generation audience, the Radeon will get the powertrain shared with the Victor. The mill is said to generate the peak power of 8.5 BHP at 7000 rpm and delivers 8.7Nm of torque at 5000rpm via a mated gearbox manual transmission. While the mileage figures for the said mill is 72kmpl.

TVS Radeon is a new motorcycle in brand’s 110cc commuter portfolio consisting of Sport, Star City+ and the Victor. Positioned between the Sport and the Star City+, the Radeon however design-wise, is a replica of country’s most popular commuter bike, Hero Splendor. Nevertheless, it features equipment which are not only appealing but also new with the bike. They are:

Besides being the new commuter in the brand’s 110cc segment, the Radeon did not bring anything new for the audience. What buyers are going to purchase, the Hero Splendor with a slew of cosmetic highlights.

Beneath the fuel tank, the propelling unit is all identical 109.7cc Duralife single-cylinder, air-cooled motor of the TVS Star City+. Even, the churned power figures are also same, 8.4hp and 8.7Nm of torque which is transmitted to the rear wheel via a mated four-speed manual gearbox. That is a heel-and-toe shifter. At the engine front, the things which impress a lot are the engine refinement and the throaty exhaust note mildly mimicking the TVS Apache RTR 200 4V:

Thanks to raised handlebar and perfectly padded seat, TVS Radeon is a comfortable ride during the three-hour fuel efficiency run on the highway. The Radeon is based on a shared platform and suspension from the Star City+. However, the suspension setup here is firm which feels on the broken surfaces and over sharp bumps and potholes. The Automaker’s moto behind making its not only a commuter but also a mode of transport in rural areas could be the reason behind such stiff handling.

TVS Radeon is a safe commuter. It rides on 18-inch wheels shod up with tubeless tyres. Altogether, the automaker packed the bike with required drum brake unit at both wheels. The brand’s patent SBT (Synchronized Braking Technology) offers precise braking by sending the calculative braking force to the wheels.

The Radeon is a lightweight commuter with the 110cc engine. It is focused to endow great fuel efficiency and loading capability. The engine is not meant for performance which suggests a regular service at a proper interval of time is enough.

In my views the Radeon is another commuter in TVS’s portfolio that shares a lot of components with the Star City+, still, its styling and appearance made its stand apart in the crowd. it’s targeted for the semi-urban and rural market and is equipped with such qualities to carry the load. At the asking price of INR 48,990 (ex-showroom, Delhi), it is a good option for whom searching for the commuter with urban workhorse capabilities and astonishing appearance. 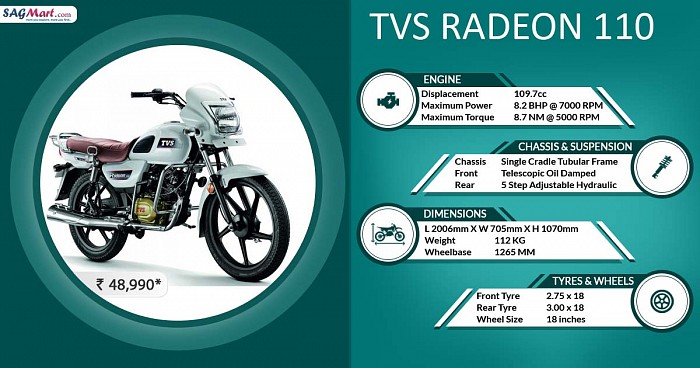