SAGMart Reviews on Apple iPhone 7 Plus

On the design aspects, the iPhone 7 Plus looks like a carbon copy of its preceder iPhone 6S Plus. However, two things that make the new iPhone a better choice is its weight and the new Home button which no longer moves and is extremely solid as seen on trackpad of Apple Macbooks.

The new iPhone 7 Plus is powered by Apple A10 processor with four cores [two high performance cores plus two low-power cores]. The four cores are designed in a way that they make optimum usage of battery power during the daily usage.

The presence of A10 processor, 2GB RAM, iOS 10 OS makes the iPhone a fine gadget giving users a smooth working experience. Additionally, the four storage options of 32GB, 64GB, 128GB and 256GB makes it a finer choice for iPhone lovers.

iPhone 7 Plus comes with a dual-lens camera setup on the back, which is believed to be one of the best cameras till now. The smartphone is blessed with a 12-megapixel rear camera and next to the standard 12MP camera sits a new 12MP sensor with a whole new telephoto lens.

The company has added the concept of telephoto lens to help the portrait shooters. Besides the 12-MP camera, iPhone boasts another 7-megapixel front shooter, capable of recording HD videos. The camera of iPhone 7 Plus is upgraded with some cool and exciting features like f/1.8 aperture, Optical Image Stabilization, Six-element lens, Body and face detection, Wide colour capture for photos, Live photos and Quad-LED True Tone flash.

The Apple iPhone 7 Plus houses a slightly bigger battery than iPhone 6 and 6S. Figuratively, the device comes with a non-removable Li-Po 2,900 mAh battery that gives user 18 hours of 3G calls, 13 and a half hours of web browsing and video streaming of nearly 8 hours on a full charge. Even the standby endurance turned out way above average (13 days) that led experts give it a very good endurance rating of 75 hours which ain't a surprise considering the fact its an iPhone we are talking about here.

The overall performance of the latest iPhone model is excellent, but its expensive price with the additional fact that the company will not be covering damage caused by excessive waterlogging or dust will surely affect the the overall sales of the product. 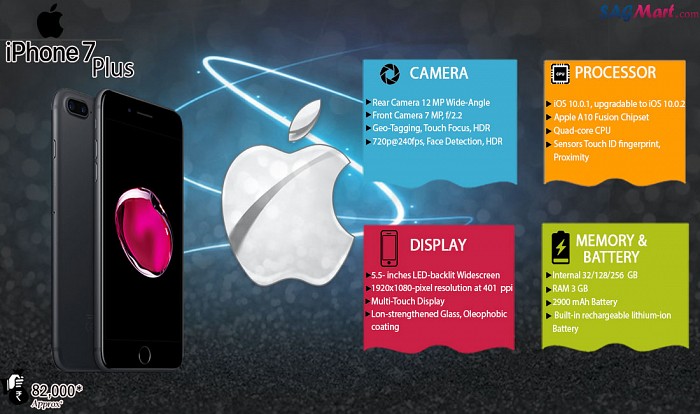