OnePlus has launched another flagship mobile OnePlus 5T just six months after the dispatch of OnePlus 5. The OnePlus 5T is a stunning device and ticks all the correct boxes. The OnePlus 5T comes with highlights, including the fast- processor, a wonderful pair of cameras, good internal storage and a sharp screen, work in tandem to make this handset work in a beast mode each time you utilize it. Let’s take a look at the smartphone overview:

The OnePlus 5T comes with a 6-inch AMOLED display with a resolution of 2160 x 1080 pixels. It has a pixel density of 402 PPI. The device has equipped a Corning Gorilla Glass 5 to protect the screen from scratches and minor knocks. In terms of design, The phone packs a metal unibody & ships in midnight black color. Top sensors on the device include an accelerometer, proximity, magnetometer, ambient light sensor & gyroscope.

The firm has made an advance to the camera system on OnePlus 5T. The OnePlus 5T packs a dual rear camera setup, each having a 16MP lens. Both come with f/1.7 aperture & are accompanied by dual LED flash that can take better low light photos than the OnePlus 5.
As for storage, The flagship smartphone comes with a large amount of data as it is equipped with a humongous 64/128 GB inbuilt internal storage without card slot support for storage expansion. 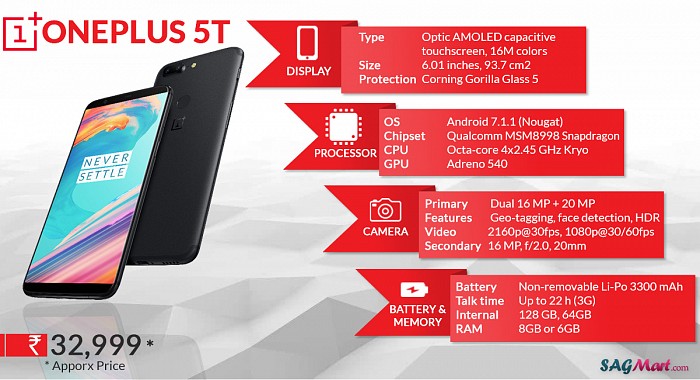