The design of the Vivo V5 makes it resemble a number of various smartphones available in the market. There's an unmistakable iPhone 6 impact in the back of the handset, and from the front, it looks like as a OnePlus 3 or an Oppo display. Build quality is great, with Corning Gorilla Glass to protect the display and the faux-metal chassis blends together very well. This handset is slim and light, weighs only 154 grams.

The 5.5-inch IPS display is brilliant with nice color saturation, which practically makes it resemble an AMOLED display. The Vivo V5 comes with backlit capacitive navigation buttons, and a unique fingerprint sensor is incorporated into the Home button. The fingerprint sensor is really fast at verifying and works precisely and can even be even used to unlock applications, in addition, to unlocking the handset. The Vivo V5 has a magnificent design and in spite of its thin profile, it offers decent grip. The base of the smartphone is very occupied as the earphones attachment, Micro-USB port, and speaker grille is altogether arranged there. There's a double SIM slot on the left, and can be used for a microSD card (up to 128GB) in the second space.

The Vivo V5 has been powered by an octa-core MediaTek MT6750 SoC, along with 4GB of RAM and 32GB of storage, which is plenty to ensure a smooth Android experience. The handset has been included with Wi-Fi 802.11 b/g/n, Bluetooth 4.0, USB OTG, GPS, and FM radio. Vivo ships the V5 with FunTouchOS 2.6, which is now based on Android Marshmallow. Vivo is among a handful of companies with a custom OS, though the trend is definitely more popular with Chinese companies. Vivo V5's software looks and functions just like it did on the previous V-series smartphones.

The iOS-based layout can be quite confusing for a first-time Vivo owner. A short press on the left capacitive button brings up a home screen customization menu, including the widgets, transition animations, and an option to hide a particular app from the home screen. The trouble here is that this menu is quite tiny, and it's hard to gauge certain widgets. The drop-down shade is used only for notifications. Other features on the Vivo V5 are pretty much identical to that of Vivo V3, including gestures for glancing at notifications from the lock screen, and a split-screen view when you get an incoming message in the video player. Vivo also throws in some one-handed gestures for the lock screen PIN keypad, and you can even shrink the screen down to make it more accessible with one hand. There's a one-handed mode for the TouchPal keyboard and you also get Google Keyboard, for the same.

Once you get acquainted with Vivo's spin on Android, it's not too bad to live with. Loading times for apps on the Vivo V5 are relatively short and there aren't any visible signs of a performance bottleneck when multi-tasking. You can do a bit of gaming too, although some high-end games like Asphalt 8: Airborne need their graphics settings reduced a bit for the best experience. This smartphone rarely heats up. The call quality is good and 4G works well and it supports VoLTE as well.

The Vivo V5 is fitted with an AK4376 audio chip, which is custom made by the company. You can enable this from the 'Hi-Fi' option in the settings app, which works when you plug headphones in. The default apps like the music and video players and some third-party apps including MX Player, YouTube, and Google Play Music can take advantage of this, but others like Apple Music aren't supported.

The highlight feature of the Vivo V5 is its front-facing 20-megapixel camera, which boasts of a Sony IMX376 sensor with f/2.0 aperture, and a fixed-focus lens. It supports full-HD video recording and FaceBeauty shooting mode. In daylight, the sensor manages highly detailed selfies with very good color reproduction. However, indoor shots under artificial lighting are grainy and there's a noticeable loss in quality. The V5 also has what's called a 'moonlight flash', which shines a continuous beam of diffused light to illuminate your face. It's not too powerful if you're holding the phone at a distance but it does a better job at lighting you up than a typical LED flash or a screen flash. You can fine tune your selfie with the 'One-tap makeover' option.

After using the primary camera of the Vivo V5, it became pretty obvious that Vivo hasn't paid as much attention to it as the one in front. The quality of photos is strictly average. In daylight, landscapes lack detail, while macro shots just don't look sharp, even after a lot of trying. Colour reproduction is alright but there is visible chromatic aberration around the edges of objects. Low-light shots are sub-par with lots of color noise and poor details. Video recording maxes out at 1080p, and apart from there being no stabilization, quality is good. Shooting modes include panorama, HDR, night, professional, PPT, slow-motion and hyper lapse. The iOS influence extends to the camera app too, as the old logo for Siri is now the shutter button.

The Vivo V5 is fitted with a non-removable 3000mAh battery that lasted 11 hours and 41 minutes. The smartphone has very good standby time, so if you aren't a very active user, you could potentially stretch it to two days on a single charge. Fast charging isn't supported, but the 10W charger can get you up to a 25 percent charge in an hour.

The Vivo V5 is a step up from its predecessor but fails to strike a decisive blow against the competition. However, at Rs. 17,980, this smartphone lags from its major competitors like Oppo F1s and Gionee S6s.

The marque feature of this phone is its 20-megapixel front camera, which seems impressive, but isn't actually ground-breaking in any way. The Vivo V5 does have a few redeeming qualities, like the display, excellent battery life, and snappy Android performance. 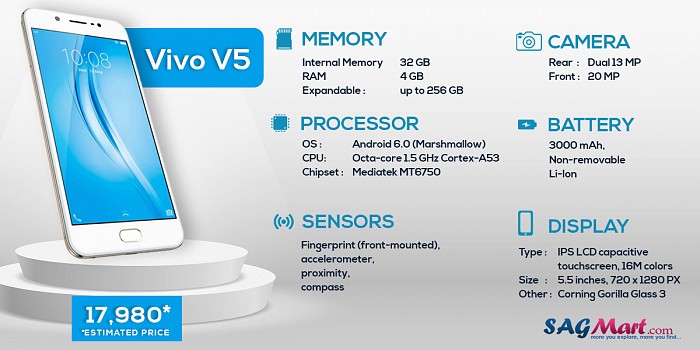