Yu Yureka Note phone features a 6.00-inch IPS LCD capacitive touchscreen, 16M color display along with a resolution of 1080X1920 pixels at a PPI of 367 pixels per inch. The smartphone has a stunningly sharp and clear display, which is Protected by Corning Gorilla Glass 3. The Yu Yureka Note, like many other phones in its range, features a Fingerprint (rear-mounted) sensor. Other sensors equipped in this phone include an accelerometer, gyro, proximity.

The Yu Yureka Note is powered by an Octa-core Cortex-A53 processor clocked at 1.5 GHz and paired with 3GB RAM, which helps in providing a smooth experience for heavy multitasking. Still, heavy games like Asphalt 8 shows frame drop if played at high graphic settings, so users are advised to play those games at lower graphic settings. The smartphone offers inbuilt storage of 16GB, which can be expanded further up to 128GB via MicroSD card. The Yu Yureka Note runs Android OS, v5.1.1 (Lollipop) Operating System.

Yu Yureka Note packs a 13-megapixel primary camera along with phase detection autofocus and dual-LED flash. An 8-megapixel front shooter is also provided by the company for selfies. The 13-megapixel rear camera also features Geo-tagging, touch focus, face detection, HDR, and panorama. The camera gives an average performance in daylight photography but seems to be struggling heavily in the night. Meanwhile, The front camera of the handset also gives an average performance. So, we suggest using any third party application to enhance the camera performance of the handset.

The Yu Yureka Note is backed up with a 4000 mAh, non-removable Li-PO battery, that gives the user 18 hours of 3G calls, 13 hours of web browsing and video streaming of nearly 8 hours on a full charge.

The Yu Yureka Note phone is blessed with an attractive design language with a powerful Mediatek MT6753 1.5GHz octa-core processor coupled with 3GB of RAM. Just the camera part of the handset is not satisfying but apart from that, it is up to the mark. So, if you are not a camera freak, you can go with it, but if not, you may have to think again about it. 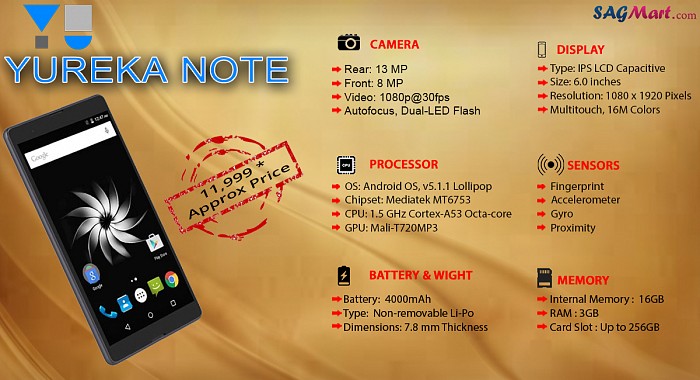