Hero MotoCorp has introduced the updated 2017 Pleasure in its Indian lineup. The scooter has received BS-IV compliant engine, Always Headlamp On(AHO) features and a host of new paint schemes. It is priced to purchase at Rs 53,800 (ex-showroom, Mumbai). The 2017 Hero Pleasure is five hundred bucks costlier than the outgoing model.

On the aesthetics front, the Pleasure did not get any styling changes, however, it witnessed the addition of two new dual tone paint schemes in the available range of five mono-tone colours along with new decals. To make a perfect blend of colours, the bike maker has blacked out a few scooter components such as exhaust unit and the wheels.

Apart from this, the features which are added to this 2017 year version of the pleasure are a mobile charging port in the glove box, a light in the under-seat storage compartment and AHO. 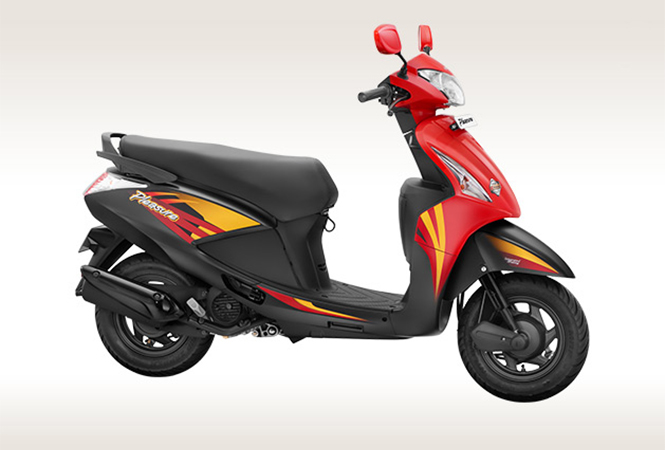 Rides on tubeless tyres, the 2017 Pleasure gets propelling power from the same 102cc single-cylinder engine of the outgoing model. The equipped engine is capable of producing 6.9bhp and 8.1Nm via a CVT transmission.

The Pleasure which has rolled out in 2005, was based on the previous generation Honda Activa. And, for it, Hero has to pay royalty to the Japanese bike maker for sustaining the Pleasure in its product lineup. Well, in terms of performance, the scooter has not been able to match its host, but as it is performing really well in the market made the Hero MotoCorp to keep continue in its lineup.

In the coming future, we can expect the fitment of a completely new engine developed by the Hero.On rivalry end, the Pleasure will knock its head with the likes of Honda Activa-i, Suzuki Let’s and the TVS Scooty Zest.

Hero MotoCorp Armed its Commuter Bikes with the Safety of SBS
Views: 1705