Bajaj Auto that has enjoyed success with its co-partner KTM Motorcycles in the Indian market, is now looking forward to expanding this partnership in other dense markets like Indonesia. A local assembly facility for KTM Motorcycles has been announced by the Indian two-wheeler major that will be established by end of this financial year. The KTM motorcycles which are being provided for the South East Asian market will be assembled there.

Last year, the KTM Motorcycles officially marked its presence in association with its 100 per cent subsidiary PT. Bajaj Indonesia. The initial customer response was pretty impressive that made the automaker to set up such a CKD production site in the country.

Earlier in the 2017-18 annual report, the Bajaj Auto has already expressed its intention of introducing such CKD production site in a note. The company stated,”The plan for PT. Bajaj Auto Indonesia is to spearhead the development of KTM and Bajaj partnership and bring the jointly developed products into Indonesia. To take this further, all the required manufacturing, import and business licences have been renewed. Further, studies on the product acceptability have been conducted, which look favourable."

The models which are available to purchase in Indonesia include the Duke and RC in engine displacement of 200,250 and 390cc. The country witnesses the availability of these bikes all the way from CBU route from India. For your reminisce, Chakan based Bajaj-KTM facility that is a global export hub produces all these bikes.

The process for setting up local assembly in Indonesia has been commenced and the company is wishing to start operations by year-end. 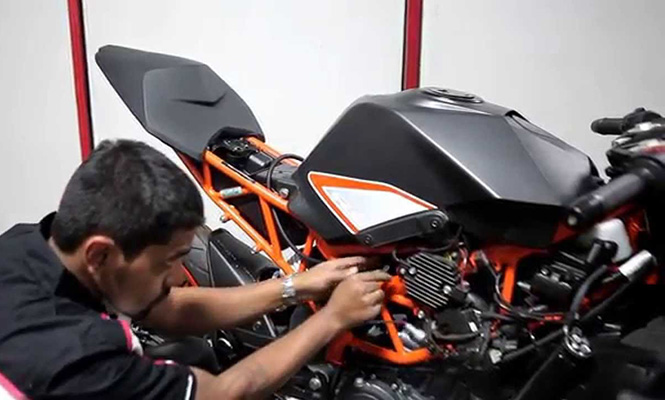 "In addition, CKD configurations have been created and the process of seeking clearances for these configurations has started. The Company plans to kick off the business operations for PT. Bajaj Auto Indonesia in the current year with the CKD production in Indonesia," said Bajaj. Previously in 2005, Bajaj with its partner Kawasaki launched the Pulsar range in Indonesia. However, it did not work out and the company has to wear huge loss.

As of now, PT. Bajaj Auto Indonesia is not operating in the market. Last year, Bajaj investment $39.95 million (about ₹ 260 crore) in the subsidiary as a result of the share capital reduction.

Last year, the Bajaj re-affirms its operations with KTM in Indonesia in order to get a good and fresh start. With the commencement of local assembly, not only the bike prices but also its spares will be priced lower than ever.