Looks-like the Pune-based bike manufacturer is all set to enlighten the Indian audience by a duo treat via the launch of a new flagship model in its portfolio. Yes, you read it right. Bajaj-Auto, the well-known native moto giant is planning to launch its much-awaited Pulsar RS400 by the auspicious occasion of Diwali to follow the upcoming CS400. Both the tourers were earlier unveiled at the 2014 Auto Expo and now the manufacturer has finally decided to grab the game of Indian automotive market into its area.

As per the earlier reports, the upcoming cruiser CS400 is all geared up to make its move by mid-2016. Following this, the RS400 will also come this year by the festive season, said the company officials. In terms of mechanicals, both the machines will take the identical 375cc, single-cylinder motor that is inherited from the KTM 390 Duke and RC 390. The liquid-cooled engine would probably get the Triple-Spark technology from Bajaj. 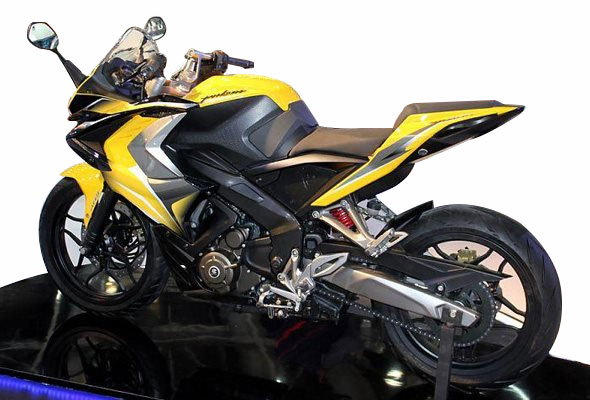 On the styling front, the newbie gets inspiration from its elder sibling- the RS200, which is moving successfully in the market as of now. The bike sports sturdy fuel tank with razor-sharp edges, LED day-time running lamps, twin-projector head light, crystal LED tail lights and a trendy muffler, which makes the motorcycle look damn cool among its competitors. Besides, there will be an option for Anti-lock Braking (ABS), however, whether it will be single-channel or dual-channel, we have to wait a little while to see that.

Expect the motorcycle to be priced extravagant, near INR 1.6 lakh for the base variant. Although, these are random figures, but, as we all know Bajaj is known for its aggressive pricing, it would certainly go for the same this time as well.