After a grand unveiling of the forthcoming Tornado 302 and TRK 502 at the 2016 Delhi Auto Expo, DSK Benelli has showcased both the adventure bikes at the moving India Bike Week. Mr. Shirish Kulkarni, Chairman, DSK Motowheels Pvt Ltd., confronted the audience about the launching plans in later this year.

Power specifications of the Tornado 302 are identical to that of TNT 300. The bike has been powered by a 300cc inline cylinder, 4-stroke, liquid-cooled engine, which churns out 35.3 PS of maximum power and 27 NM of peak torque. All power is sent to the rear wheel via a six-speed gearbox. Suspension duties are performed by 41 mm upside down forks up front and swing arm with central shock absorber at the rear. The motorcycle has been armed with 260 mm double petal disc brake at the front and a 240 mm single disc brake at the rear end, to perform the braking responsibilities. Anticipated to get launched in mid-2016, the bike will hold a price tag of around Rs. 3.5 lakh. 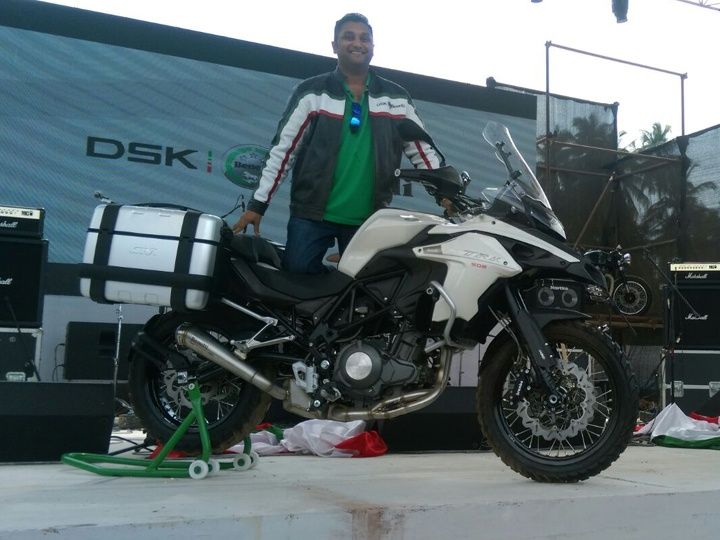 Second in the adventure Tourer category- TRK 502 is completely a middleweight touring voyager acquiring a host of features like USD forks up front, spoke wheels, 20-litres fuel storage capacity, aerodynamic fairing for diminishing wind impact, and much more than that. The mill comprises of a new 499.6cc, liquid-cooled, parallel-twin engine that outputs 46.9BHP of power and 45NM of torque mated to a six-speed transmission imparting smooth shifting through a hydraulic clutch. It is expected that TRK 502 is probably going to be launched in the 2016 festive season.