2019 BMW G310RR supersport that is considered to be an exclusive offering of BMW Motorrad’s upcoming launches, has been emerged online via image leak. The German bike maker is set to introduce 9 new models in the coming future. The surfaced images of brand’s recent exhibition at BMW Motorrad Days in Japan made the new BMW G310RR divulged in front of the audience.

From the images, it is clear that the bike sports extensive carbon fibre throughout the body and has “G310RR” inscribed on the fairing.

It is assumed that the 2019 BMW G310RR will be built on the chassis underpinning TVS Apache RR 310. Also, we can see other cycles parts like the wheels and suspension as shared elements. 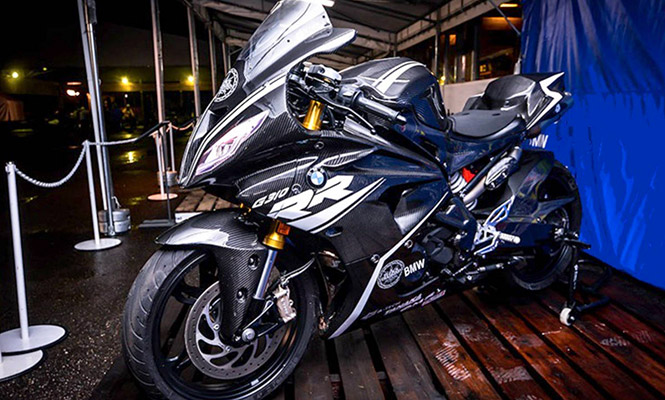 In terms of design and styling, the new G310RR supersport seems inspired from the BMW S1000RR with grilled side fairings and a nose spoiler. In the segment, the upcoming supersport will go in competition with the likes of Honda CBR300R, KTM RC390 and Kawasaki Ninja 400.

The BMW G310RR is being developed both in-house and in association with technical partners. Such supersport styling and carbon fibre bodywork, makes us believe that the automaker is getting ready to compete in World Supersport 300 Championships. While it displays in front of the audience is expected at the Intermot Show in October and at the EICMA Show in Milan in November 2018.