Bavarians have given a great confection to its admirers to style it in the way they want. The BMW RnineT has been crafted so many times by the factory next designers to get the machine reformed in their peculiar styling. The German quality mated with the exquisite taste of distinct flavor has yielded wonderful things. This time, a Japanese guy, along with four others has showered their creativity over the machines, which were ordered to them. They all have done a remarkably awesome job over their projects and make over the complete bike to suit different purposes in effective manner. It is noted that the BMW RnineT comes with a lot of room for customization and it has been provided by the company itself to go wild with the aftermarket tailored outfit of the same. 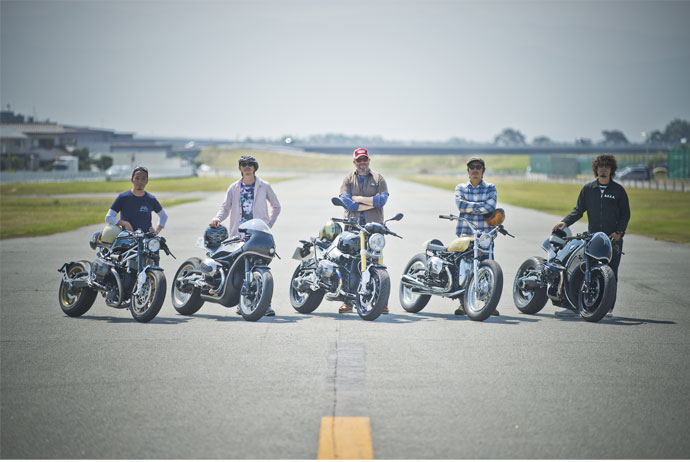 The 4 fellows who crafted these super machines are Go Takamine, Hideya Togashi, Kaichiro Kurosu, and Shiro Nakajima. These people have designed four bikes with different themes. Go Takamine had designed a brat style motorbike which resembles to a scrambler design. It is named as Cyclone. The yellow colored outfit matches thoroughly to the character of the actual and virtual styling of the bike. The designer has omitted most of the visual parts from the original one and placed a slimmer fuel tank, raised up handle bar, small but round shaped headlight and a café racer seat with rear rising in slope. The tyres and exhaust have also seen a custom built bout to the overall stance. Surprisingly the brakes have also been molded into drums. 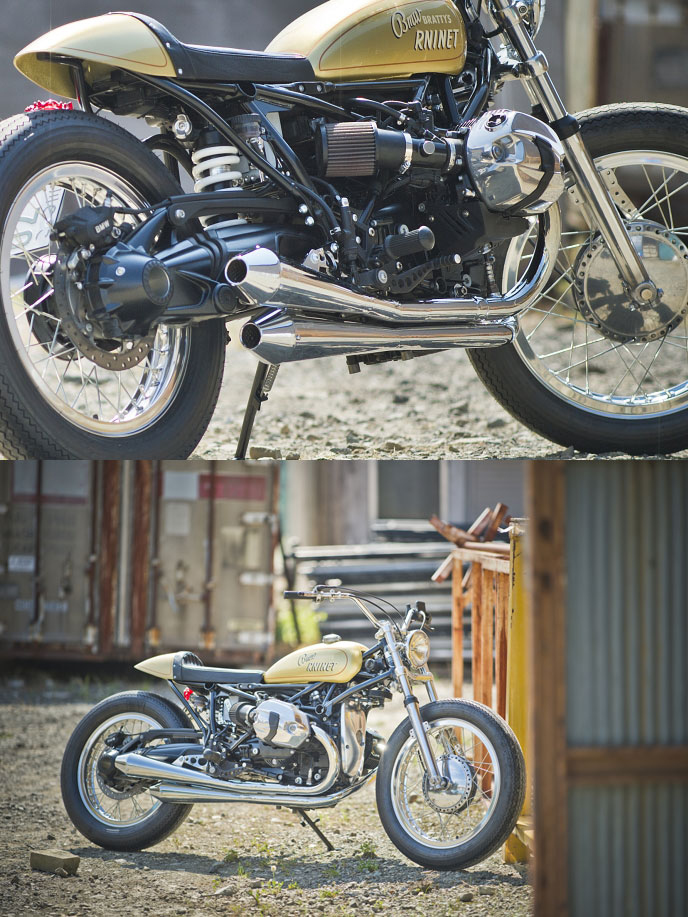 The Highway fighter RnineT made by Kaichiro Kurosu is a roaring beast with complete body work carried out ingeniously with fairing and a lot of black shades across the wheels, engine, tank, seat and rest everything. A lowered handle bar has also been employed on the job for the robustness and combative attitude. Though, the mud flaps have been discarded in consonance with the fairing assembly building it a real fighter over the terrains. The single seat allowed the rear tyre to go beyond the bike’s last point, producing a broad view for the Netzeller emblem. 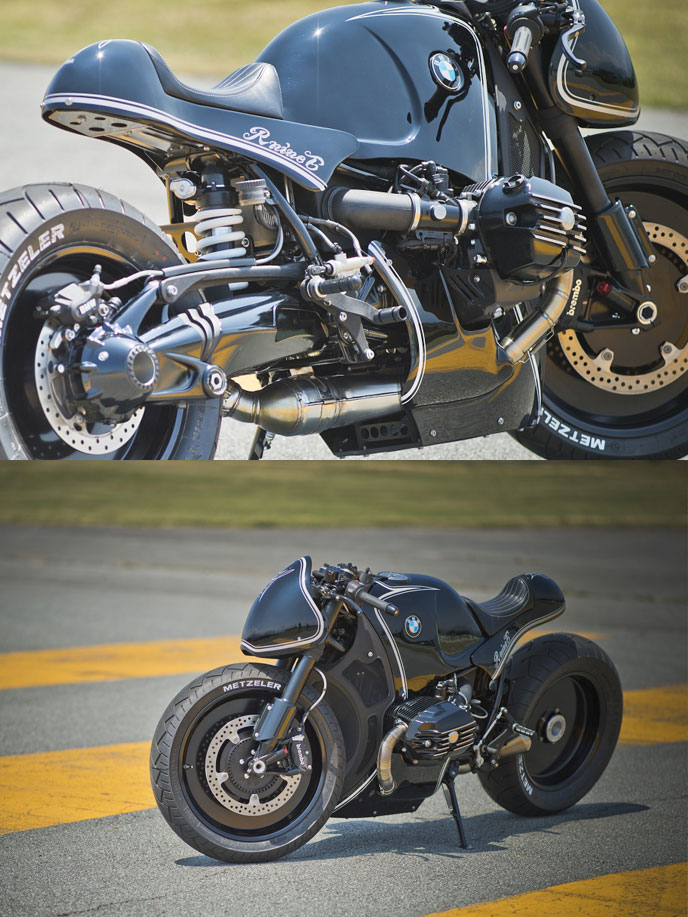 The retro glamour Clubman Racer produced by Shiro Nakajima is an indifferent café racer. It is the most naked looking contender over here with visible frame, engine, shaft box and calipers painted in light bluish grey color. A new exhaust unit with new air intake has also been placed on the job and they are also been designed in the retro styling. The blue body visuals will definitely look cool with multi shade aviator glasses. The stock tyres have also been replaced with the newer ones along with dual exhausts on both the flanks to fill the naked appearance charm and zeal. 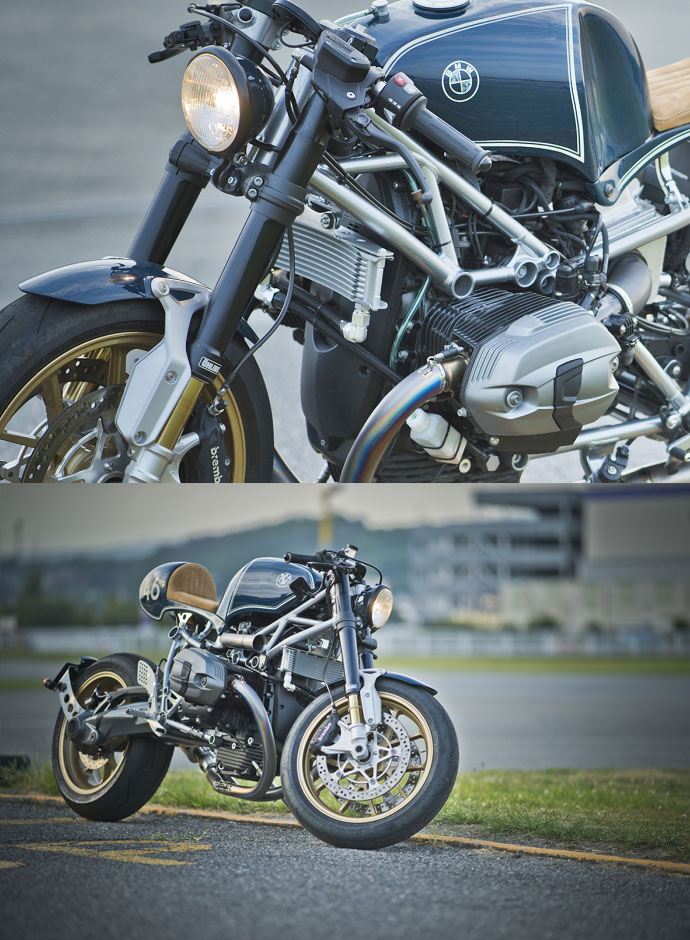 Lastly, the Streamlined custom gift holds the Ingenuity of a true faired racer. The miniature headlight and tail light are placed effectively in the provided gap. Fairing job is remarkable with clear curves and lines initiating at head light position and going all the way to the radiator spot. The dual tone color scheme is being used with the ride and it is kept over the places including engine and fuel tank. A big elliptical visor has also been placed over the head light to make it remember of a 3 decade old motorcycle tradition used for combat scenarios. 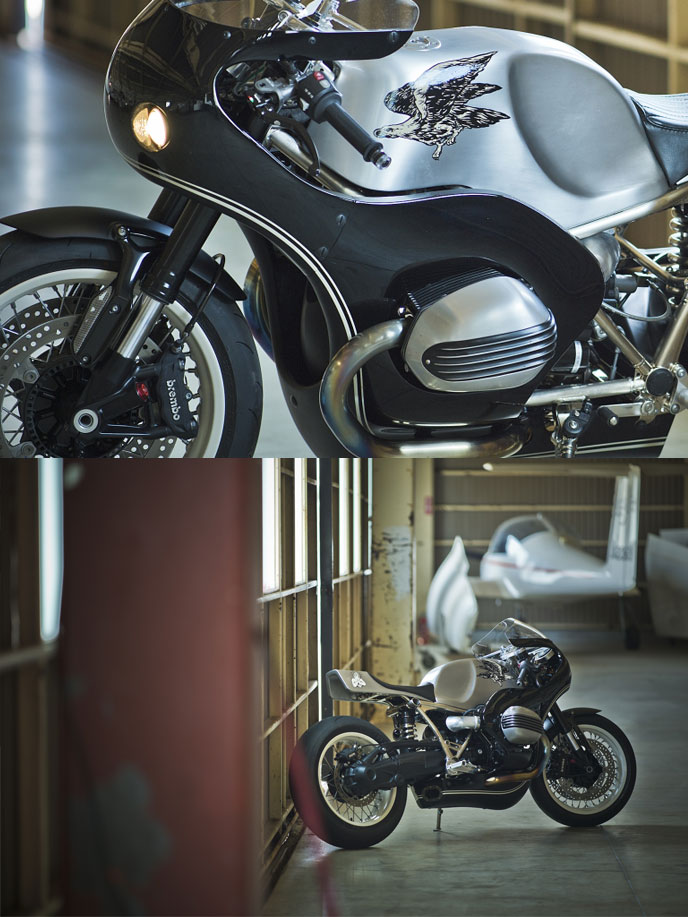 All the bikes were inclusive of great skills and the designing approach, but the opportunity provider BMW has made this possible to get this iconic super bike transformed into what we have seen here from these folks.