The BMW S 1000RR which has got updated with 2019 calendar year updates leaked online via a social media platform. In the leaked images, there was details of the new BMW S 1000RR like engine specs, electronic features and optional accessories.

Ahead of its unveiling, the motorcycle has been snapped several times performing test runs. The market-ready variant is radically different from the prototype model. It now packs evolved frame and swingarm. Well the fairing, the tail section is revised components on the 2019 S 1000RR wears a symmetrical headlamp design. 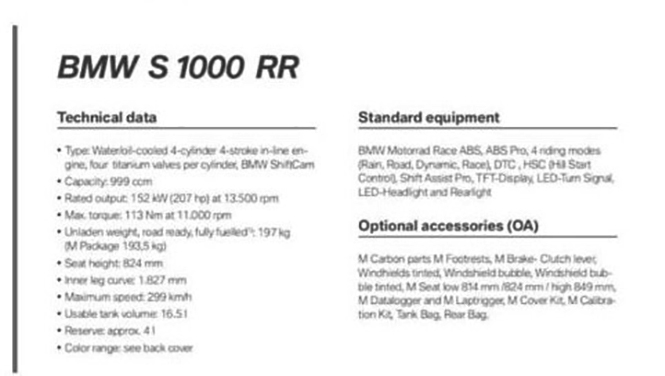 Read also: Autonomous BMW R1200GS Unveiled: Start, Turn and Stop All by Own

The leaked list of optional accessories includes M-series footrests, brake and clutch levers, tinted and bubbled windscreen and more. Here in India, the 2019 BMW S 1000RR is likely to reach around next year. While the motorcycle expects a price tag higher than the outgoing model available on sale at the asking price of INR 18.05 lakhs (ex-showroom, Delhi).