Here is a good news for Ducati lovers!!! The Indian arm of Italian bike maker is all prepared to launch the top-of-the-line Scrambler member, the Scrambler 1100 on August 27, 2018. The launch announcement was made on brand’s social media channels. Also, its launch is expected on Twitter as similar to its previous few launches. The model in the segment will compete with the German manufacturer's already available contender, the BMW R Nine T. Here, we will check how these rivals will stack each other on paper specs.

Apparently, the Ducati Scrambler 1100 shares its design language from its standard 803cc Ducati Scrambler above on sale. However, it boasts of a sort of premium essence in the form of aluminium touches on components such as the engine covers, clutch and alternator cover. Further, the bike is furnished with an upswept twin exhaust setup that comes up parallel to the pillion seat. 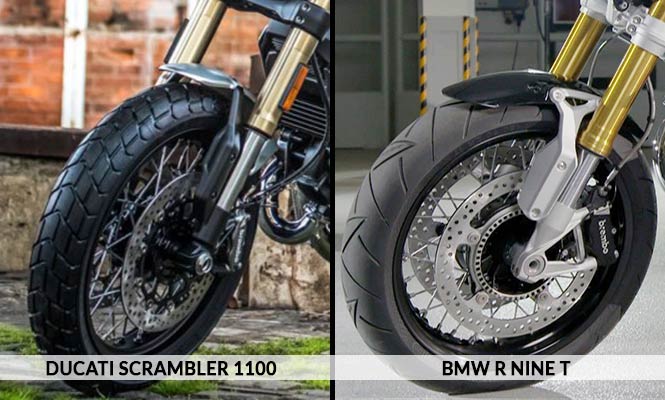 On the other hand, the BMW R Nine T features a cafe racer look if observes from the rear. Else, the furnishing of components such as round headlamp, wire spoke wheels and aluminium accents on the analogue instrument cluster offer a retro appeal. Apart from this, the BMW R Nine T is offered with a host of customization freedom. One can replace the rear subframe with a hump, and for solo riding experience, the rear frame can also be eliminated.

The Scrambler is packed with a comprehensive electronics package including three riding modes, and a five-level traction control system. Other than this, the Ducati Scrambler 1100 receives an inertial measurement unit (IMU) which allows the rider to control the cornering ABS as per his suite. On board, there is a new LCD instrument panel with indicators for riding modes and traction control. 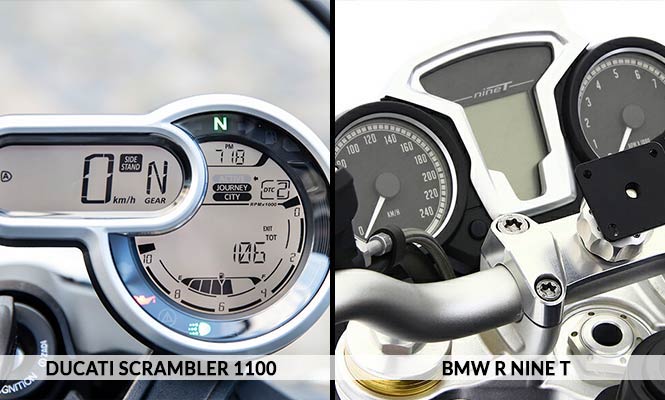 The BMW R Nine T gets an analogue instrument console and the fitment of technological aspects consisting ABS as standard and automatic stability control as an option.

In terms of power, the Ducati Scrambler 1100 gets the propelling power from 1,079 cc, L-twin engine borrowed from the Monster 1100, but tuned up as per the bike’s suite. The engine offers a better throttle response as the generated power and torque of 85 bhp at 7,500 rpm and 85 bhp at 7,500 rpm respectively to the rear wheel. 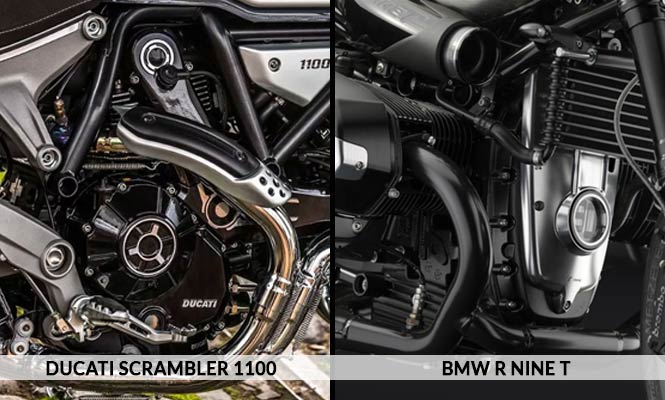 The new R nine T gets an air-cooled flat twin 1170cc boxer engine. The engine pumps out the peak power of 110bhp at 7550rpm and a peak torque of 119Nm at 6000rpm. All the generated power reaches to the rear wheel via a mated 6-speed gearbox connected to a cardan shaft drive. The engine is capable of returning the fuel economy of 22Km/l and the top speed of 200Km/h.

BMW R nine T is the fourth roadster in a row that is available on sale at the price sticker of INR 23.5 lakh (ex-showroom, Mumbai). Other roadster available models include the S1000R, K1300R and the R1200R