The 8th time in the 12 years long duration, Italian marque- Ducati has been honored for its recently showcased new Sports tourer, Ducati SuperSport at the 2016 EICMA Milan Motorcycle Show. The motorcycle has been crowned by the title of the Most Beautiful Bike of the event.

Besides observing the last minute touch-up thereafter its INTERMOT rollout, the SuperSport has managed to win around 31.4 percent of voters as their first preference in the survey “Vote and Win the Most Beautiful Bike of the Show”. The study was organised by the Italian magazine, Motociclismo for which more than 12,000 voters have inked the SuperSport as the new queen. The MV Agusta Brutale RC edition and the 2017 Honda CBR1000RR ’Fireblade’ has followed the SuperSport on second and third position respectively in rankings.

All in all, Ducati has put 7 flagship models on display at events, this year. Out of which five serves multifarious genres, whereas the two other falls in Scrambler featurings. If talked about the SuperSport mechanicals, the Sports tourer get the acting power from the equipped Testastretta 11 degree twin-cylinder powerplant displaced by the 937 cc. In its healthy state, the said powertrain is asserted to expel out the maximum power figures of 113 bhp and 96.7 Nm at 9,000 rpm and 6,500 rpm respectively. 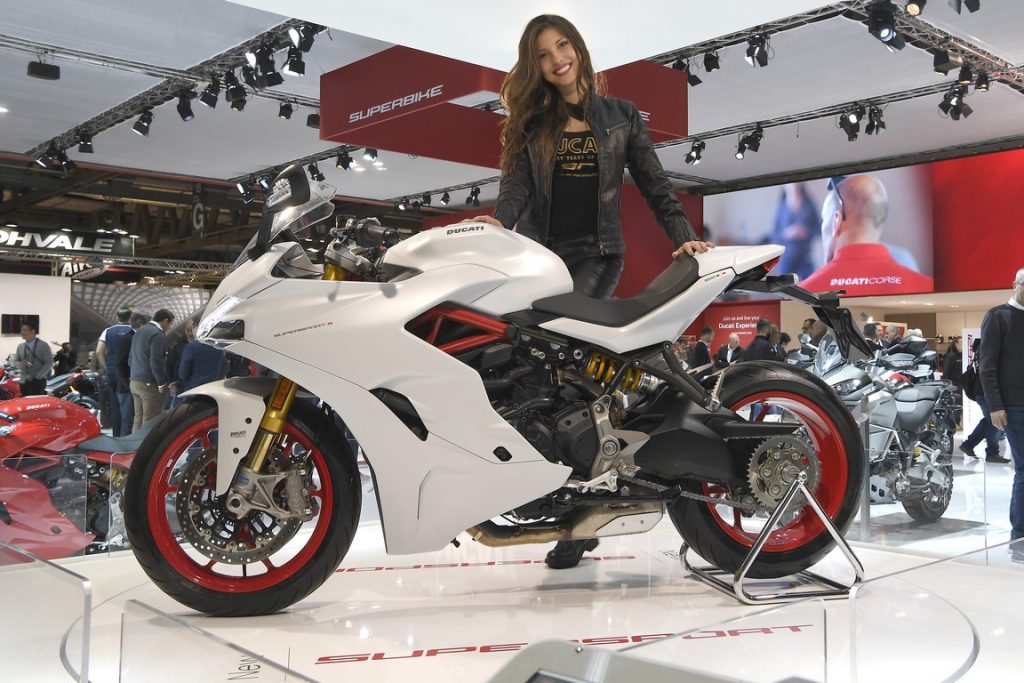 The new Ducati SuperSport has been introduced in two trims- standard version SuperSport and the performance oriented SuperSport S. in responsible cycle parts end, the standard version comes fitted with 43 mm Marzocchi forks upfront and a Sachs rear mono shock. On the other hand, the next offering, SuperSport S did the same suspension duties by the assigned a 48 mm Ohlins USD front fork and a rear mono shock under the above mentioned courtesy. More in addition, it also receives a bi-directional Ducati Quick Shifter and a rear seat cowl.

In terms of future sales, Ducati has a strong expectations with this flagship product, which endows a best mix of comfort and aggressiveness. And it is also being believed that SuperSport could replace the ongoing Panigale 959 from the market.