An entry level variant of the existing Mahindra Mojo has been spotted performing test runs in Pune, Maharashtra. The motorcycle was captured on images by one of the MotorBeam reader and anticipations are it would be a low-cost motorcycle with the price sticker around Rs. 20,000 less than the ongoing Mojo.

Cosmetically, the spied Mojo with the shared features including twin-pod headlamps, LED tail-lights and disc brake setup resembles the existing Mojo. However, the single exhaust unit in place of dual exhaust setup and comparatively thinner rear tire are new installments which will help to shed some motorcycle weight as well as will keep its price in check. 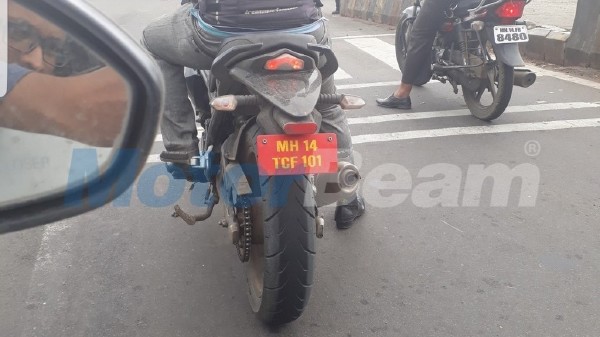 Mechanically, the Mojo gets propelling power from a 295cc, single cylinder, liquid-cooled engine which is rated to churn out 27hp of power and 30 Nm of torque through the mated gearbox. Though, the forthcoming low-cost Mojo is likely to get carburetor injection for ignition.

If the rivalry is being concerned, the Mahindra Mojo has no direct rival but on the pricing basis, it competes with the KTM Duke 250, Royal Enfield Himalayan and the Bajaj Dominar 400. The current Mahindra Mojo is available to purchase at Rs 1.65 lakh (ex-showroom, Delhi). While, the upcoming Mojo, which is expected to launch by November 2017, will carry the price sticker of Rs. 1.45 lakh, around 20,000 cheaper than the current Mojo. Other than this, a few other variants of Mojo including an adventure and cafe racer version are the part of company’s plan in the coming future.