FB Mondial HPS 300: Know all about the Quarter-litre Scrambler

The latest update in the bike world is that the FB Mondial HPS 300 deliveries have been started from December 2018 to the customers. FB Mondial HPS 300 is a quarter-liter scrambler which is reportedly ready for its launch in India in mid-September. Here, the brand is preparing to set its feet in association with Kinetic-owned Motorcycle. The HPS 300, is third of Italian motorcycle manufacturer vehicle post the Hipster 125 and Hipster 250, introduced while the FB Mondial revived in 2014. FB Mondial was founded in 1936 which was globally recognized for its motorsports race machines up until 1957. Later, the financial crises made the bike maker shut shop.

As reported, the HPS 300 Scrambler will see the local assembly at Motoroyale’s Ahmednagar plant. To know more about this quarter-liter Scrambler and its rivalry in the hot and happening mid-capacity segment, keep on reading.

The HPS 300 outlook defines it as a scrambler with a retro appeal. Designed neatly, the motorcycle posses an egg-shaped halogen headlamp, complements distinctly crafted fuel tank. While the extended shrouds offer to cover to the upper portion of the radiator and a mass-forward appearance. 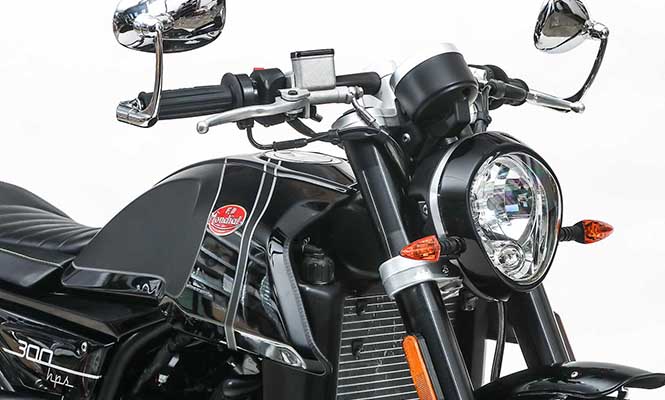 Further, the placement of scrambler-type twin exhausts next to side panels seems aggressive, thanks to brushed steel finished and black stylish heat shields composition. The seating is a ribbed unit ends up with a hump, feels pretty uncomfortable for the pillion rider. While, the design rounded off by a meaty tire, tyre hugger with a license plate. Other than this, a meaty-looking engine cowl is one of these major highlights, which not only safeguards the engine at bumps but also adds an appeal to the bike. 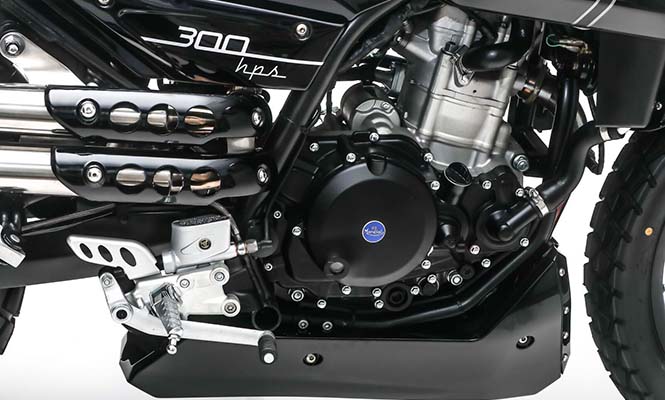 The placed powertrain on the HPS 300 is not a unit which its name suggests. Actually, it’s a 249cc DOHC single-cylinder liquid-cooled, fuel injected motor that is capable of generating the peak power of 25.1PS at 9000rpm along with 22Nm of torque at 7000rpm. The engine is coupled with a 6-speed transmission with a chain drive. Sad but true, its fuel tank only offers the capacity of 9 liters, which bounds the owners to go on long rides.

Mounted on 41mm upside down front forks and twin gas-charged shock absorbers, the FB Mondial suspension setup does not support the scrambler way of riding. As it gets travel distance on both the units pretty closer, 90mm and 120mm respectively that not at meant for trail riding. The truth will only unveil post a ride which will tell how the bike will perform in the real world. 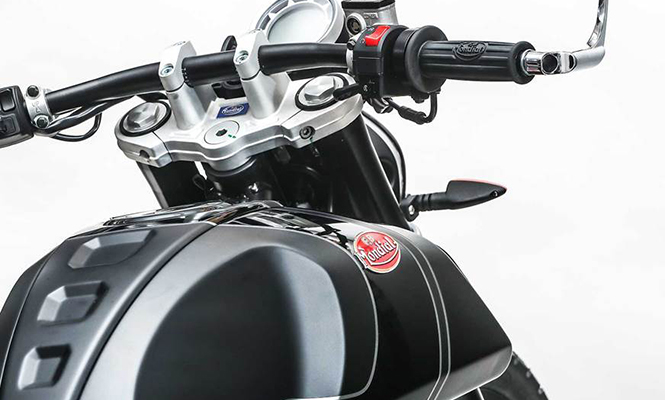 The bike runs on an 18-inch front and 17-inch rear spoke wheel setup shod up with knobby tires. The front got 100-section unit while the rear is wrapped up with 130-section tyres. The braking is under the consideration of 280mm front and 220mm rear petal discs in association with the dual-channel ABS as standard fitment.

In terms of pricing, the FB Mondial HPS 300 is likely to tag with the price sticker around INR 3 lakh, ex-showroom. In this displacement category, this quarter-liter Scrambler will go in competition with the KTM 250 Duke that is priced at INR 1.79 lakh ex-showroom Delhi. While considering its expected price tag, we can expect its rivalry with the Husqvarna Svartpilen 401 with 300cc-plus capacity and the KTM 390 Duke and the BMW G 310 R. The Husqvarna Svartpilen 401

is expected to launch soon in the entry-level niche scrambler space.