Pawan Goenka, managing director, Mahindra & Mahindra Ltd said "Having identified several areas for joint development, both companies will continue to work together to develop products using common product platforms. This will reduce product development costs and gain economies of scale for both companies”.

In February of this year, it was reported that the forthcoming new SUV of Ford will be launched out in association with Mahindra. The forthcoming SUV will be based on the platform which supports the next-gen Mahindra XUV500 whose code name is W601. Although Ford will provide mechanical and engine, but this will not be the only badge-engineering exercise. The Ford C-SUV will come with new externals, internals, enhanced chassis and the rides and handling will be same like the other cars of the Ford. The manufacturing of the Ford SUV will be done on the Chakan plant of Mahindra where the XUV500 was built. 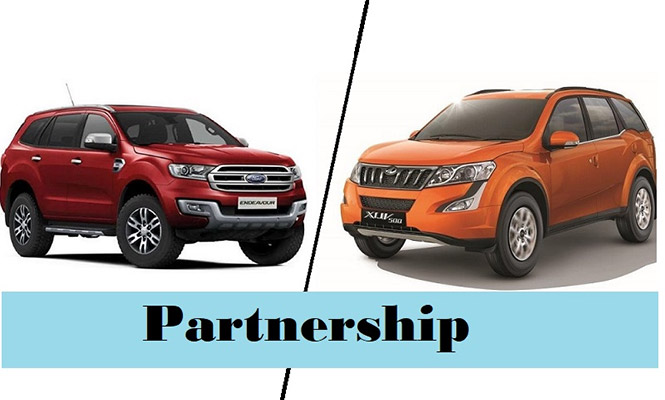 Read Also:- Mahindra TUV300 Facelift: What's New We Can Expect in Each Trim

It is expected that the Mahindra with code name W601 will be launched at the end of the 2020 and will be built on the latest monocoque platform. It will come with a longer wheelbase and a larger back overhang if compared with the current running XUV500. Mahindra W601 will be powered by the latest generation, state-of-the-art, 2.0-litre diesel which is assumed to churn out 180hp of power. This is the BS-VI compliant powertrain which even the C-SUV of Ford will carry.

Ford will furnish both the SUVs with the touchscreen infotainment system. The new system is lower than the Sync3 suite and will most probably get the screen same like the lower-spec Ford EcoSport but with upgradations.

Both carmakers gave a joint statement which stated that the main aim of the association is to grow the Ford across the world and make it expert and apart from this they also want to make the Mahindra a successful model in the country. They also associated for improving distribution, electrification, and product development. In October 2018, Mahindra nodded its head to supply new small-capacity BS-VI compliant petrol powertrain to Ford because to deepen their association.

Mahindra Confirms Next-gen, Will Not Participate in Auto Expo 2020
Views: 5782