Earlier in 2014, Hero Motocorp showcased the HX250 for the very first time at the Auto Expo, which became the star of the show. The same giant moto event that ended up two days ago in New Delhi, gave us a pleasant treat with many new unveilings & fresh concepts. In between the lots of stuff, the Indian automaker has reintroduced its HX250 to the audience, but with a juvenile blue livery this time. Hero has now revealed the top speed, power and torque figures, which we were certainly very keen to know about.

The bike has been powered by a 249cc single-cylinder, liquid-cooled, fuel injected motor, that produces 31.4PS of power at 9000RPM and 23NM of maximum torque at 7000 RPM mated to a six-speed transmission. HX250 acquires a top speed of 165Kmph. Cosmetically, it sports twin projector LED DRL headlights, LED tail lamps, split up seats, digital instrument console, underbelly exhaust, clip-on handle bar and for the first time it is going to be introduced in dual riding modes- city and sport. 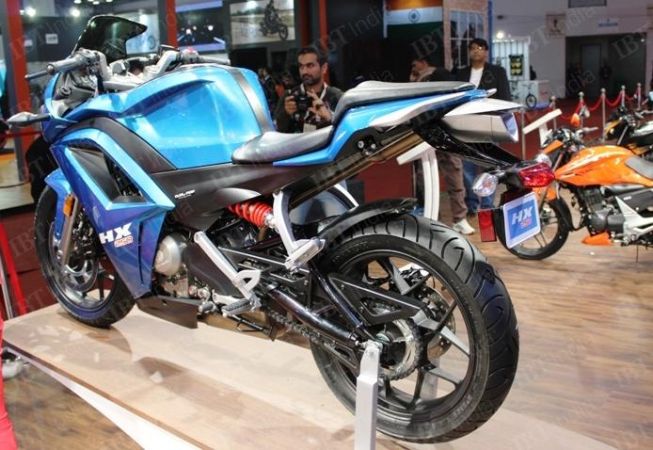 For the safety purpose, it has got disc brakes, which includes dual channel ABS. Though, no confirmation is there that whether they are standard or not. The new star will give a tough competition to the likes Honda CBR 250R and Kawasaki Ninja 300. As far as the pricing is concerned, the HX250 would be carrying a price tag of Rs. 1.5 lakh. The launch details have not been announced yet by Hero Motocorp, but it is probably going to make the move soon. For more updates about Hero HX250, stay connected to SagMart.

Hero MotoCorp Armed its Commuter Bikes with the Safety of SBS
Views: 2248