Report: Himalayan Only to be Equipped with Dual-Channel ABS

As per an announcement made by Indian government back in 2016, the motorcycles with a displacement more than 125cc are mandatory to be featured with ABS, from April 2018. Following the same, the Chennai based named cruiser bike maker, Royal Enfield is likely to update its entire lineup with this cutting-edge safety feature. As per a surfaced report, meant for off-roading, the adventurer tourer from Royal Enfield, the Himalayan will be furnished with a dual-channel ABS. Whereas the models such as the most selling Classic and the Thunderbird are likely to arm with a single-channel ABS.

Besides this prominent cycle part inclusion, no alteration will be witnessed in the Royal Enfield Himalayan. Mechanically, it will continue to be powered by a 411cc, single-cylinder, 4-stroke, air-cooled, SOHC engine. The churned out power and torque through this mill are 24.83PS @ 6500rpm and peak torque of 32.00Nm @ 4250rpm. The engine comes mated to a five-speed gearbox. The bike rides on 21-inch front and 17-inch rear wheels.

A 300mm front disc and a 240mm rear disc brake take care the braking duties on the RE Himalayan that in association with ABS technology will enhance to a next level. The ABS helps in offering better grip to the motorcycle on a wet or slippery surface. If compared both the dual-channel ABS and single-channel ABS unit, the former one is more effective as it works on both the wheels. For a reminisce, the international-specs of the Himalayan already on sale with dual-channel ABS feature. 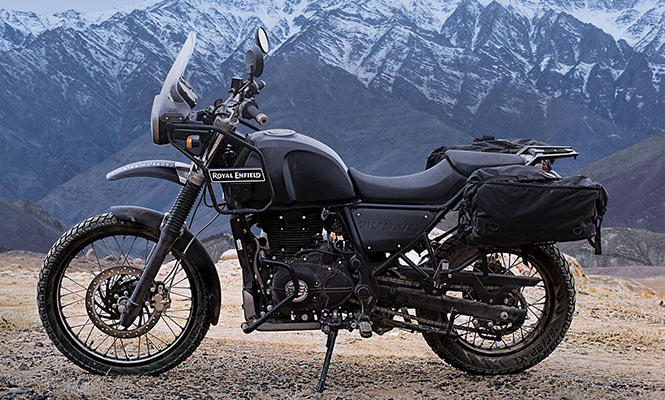 Besides, the company is also working on the 650cc range of motorcycles which will include the Interceptor and the Continental GT as the flagship products. Both of these are most likely to be equipped with dual-channel ABS as they are powerful in nature and the feature is going to be mandated in the Indian industry.

If the pricing of the Himalayan is considered, available in two variant of STD and Sleet, the Himalayan attracts INR 1,67,550 and INR 1,71,943 for the respective models. Both the prices are applicable at the authorised Delhi dealerships. Post introduction of dual-channel ABS, both the variants are likely to get premium in the range of INR 10,000 to INR 12,000. While the models which will be equipped with single channel ABS are likely to see the hike of around INR 5000 in their pricing.

Royal Enfield Bullet 350 Trails: What Else One Can Buy in Similar Pricing?
Views: 1745