Honda's Indian arm recently unveiled the new X-Blade premium commuter bike in the country at the 2018 Auto Expo. Also, the bookings for the model has also begun.

The segment also gets the elder sibling the CB Hornet 160R that is already famed in the market. Now the confusion arises for the buyers in both these models as they are kind of similar in aspects such as design and powertrain.

Well, the 160cc segment has a limited options to select. Still, the buyers get confused between both these sporty commuters. So here is categorized comparison between the Honda X-Blade and the CB Hornet 160R on designing, specifications, feature and price.

Goes by its moniker, the X-Blade features sharp and aggressive design language. The front is embellished with the new robo-face full-LED headlight, a windscreen and sleek cowls. That is further induced by aggressive fuel tank with extensions, painted in black colour. 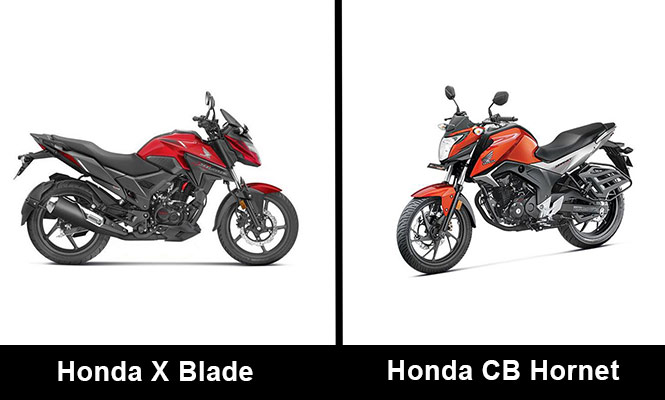 From the side profile, the elements such as the engine belly pan, black side panels with cuts and creases and blacked out engine give an sportier appeal to the X-blade. Moving ahead to the rear end, the features like a new razor-edge LED tail light, distinctly carved grab rails, a tyre hugger and dual port exhaust muffler complete the apparel of the motorcycle.

Much mature in terms of design language, the CB Hornet 160R have sporty character too. The trapezoidal headlamp with sleek cowls, massive fuel tank with extensions features at the front end. Besides, the body graphics are like cherry on cake.

The side profile of the Hornet 160R has a stubby exhaust as a noticeable bit. Whereas the cycle parts like the X-shaped LED tail light, sporty grab rails and fatty tyre completes the rear of the motorcycle.

In terms of features, the new Honda X-Blade gets an array of premium features including robo-face LED headlamp, LED tail light and all-new digital instrument cluster with a gear position indicator. In addition to that, alloy wheels, faux carbon fibre touch on the fuel tank, petal disc brake at the front and a hazard light switch are some other features of the new Honda X-Blade. 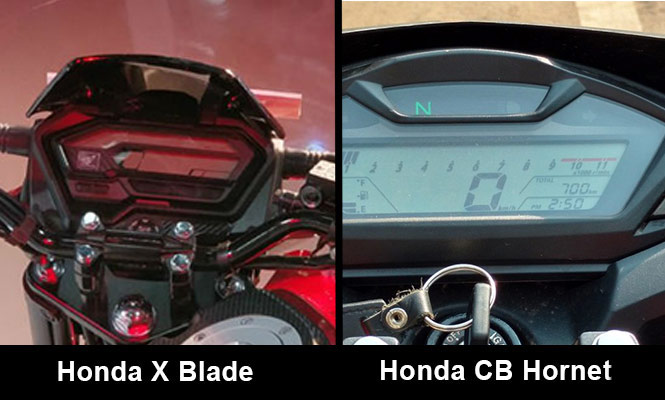 While, the Honda CB Hornet 160R furnishes with a halogen headlight, LED tail light, a wide rear tyre, a fully-digital instrument cluster which not boasts the gear position indicator similar to the X-Blade. Other than this, the Honda CB Hornet 160R is armed with a rear disc brake with CBS (Combi Brake System) that is the drum brake setup on the X-Blade. The study showcases the features are almost similar in both the models. 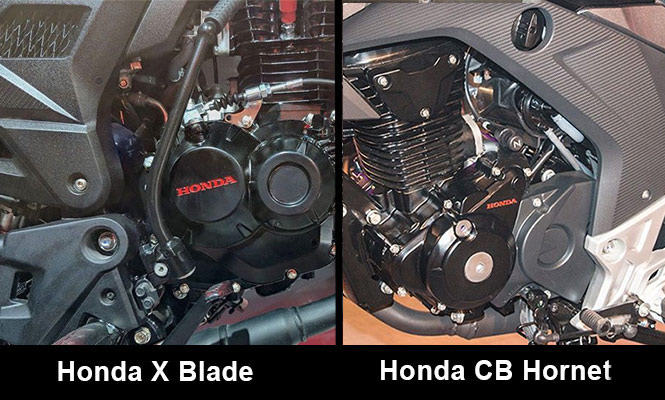 Under the fuel tank, the similar 162.7cc single-cylinder, air-cooled engine performs propelling duty on both the bikes. The churned out power and torque for the engine mated to a five speed gearbox are 13.93bhp and 13.9Nm. In terms of performance and fuel efficiency both the models will return similar figures as a common powertrain unit to the bikes.

The Honda CB Hornet is priced for INR 86,823 for the CBS variant while the standard variant of the same will make you spend INR 82,359. Both the prices are applicable at the authorised Delhi dealerships. Its competition is with the rivals such as the Bajaj Pulsar NS160 and the TVS Apache RTR 160.

The lately launched Honda X-Blade is an accessible product as compared to the CB Hornet 160R. It is priced at INR 79,000. With sportier outlook and top shelf features, the motorcycle justifies the price tag. Also, both the bikes are similar at the mechanical front.

As per my point of view, there is not much difference in both the bikes. The features and mechanicals are almost similar. But the points like design and most premium equipments will make you decide from the models in question. Check out this category wise comparison and make you mind to select your companion.