The re-introduction of discontinued sports tourer from Honda Motorcycle and Scooter India(HMSI), the 2018 Honda CBR250R has brought into a tough competitor in front of the TVS' flagship product, the Apache RR310. The Apache RR310 also made its recent debut in the middleweight sports bike segment. However, the 2018 CBR250R which was showcased in front of the audience for the first time at the Auto Expo held in February month, has also followed Apache RR310 launch at an introductory price of INR 1.63 lakh for the base variant that goes up to INR 1.93 lakh for the ABS-equipped variant. for a reminisce, both the prices are applicable at the Delhi dealership.

As the audience was expecting, Honda India to produce the 300cc CBR model though the company once again relied on its quarter-liter tourer and launch its 2018 model year version with BS-IV compliant engine and new features. Here we are trying to find which model is going to rule the segment by comparing major details of both the machines. following category wise comparison will definitely help you in selecting your companion.

Speaking of design, side by side comparison clearly declares the TVS Apache RR 310 a winner as it is captivating for eyes. Also, the price tag that is almost similar to the CBR250R makes it more demanding owing to its intense look and complete track racer appeal.

However, carrying forward the VFR inspired language, the 2018 Honda CBR looks impressive though just by replacing dual projector face of the older trim with the new LED patterns is not going to work. in addition to that, the next thing that holds the attention of an onlooker is the new paint schemes, applied for the first time by the automaker. 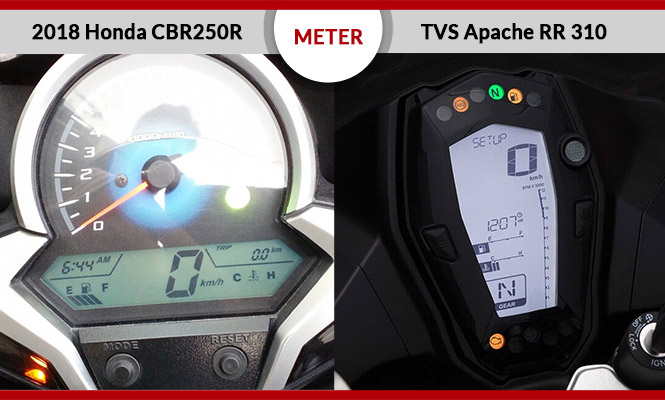 It is the next aspect to decide the winner, here too, the Apache RR 310 wins the battle by its fully digital instrument console which includes facilities such as gear indicator, lap timer, digital clock, engine temperature indicator as standard. On the other hand, the new Honda CBR250 continues with the semi-digital instrument console where readouts appear old-school style.

in terms of equipped engine, TVS Apache RR310 comes loaded with a much powerful 312.2cc engine as compared to the new Honda CBR250R' 249.6cc refined unit. the churned power output of the RR310 is much more that cannot be covered with the Power to weight ratio of the CBR. the expel out power figures are 34hp and 27.2Nm for the Apache RR310 and 26.5hp along with 22.9Nm for the Honda CBR250R. the complete engine specs are as follows: 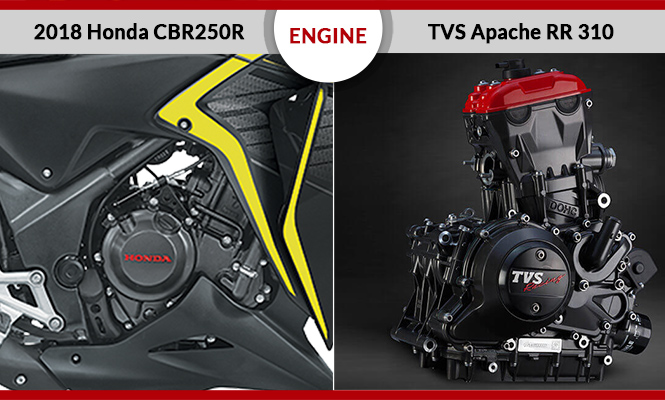 TVS Apache RR310 is an all-new supersport motorcycle from the Chennai based bikemaker that is adorned with all the upmarket equipment and features which are dual LED projectors, 2-channel ABS, higher ground clearance and sharp rear LED light. on the other hand, the Japanese bikemaker has also done a great job by fitting this new Honda CBR250R with components such as dual channel ABS, LED lights, exotic color options, and premium built quality. The host of other features are as mentioned below: 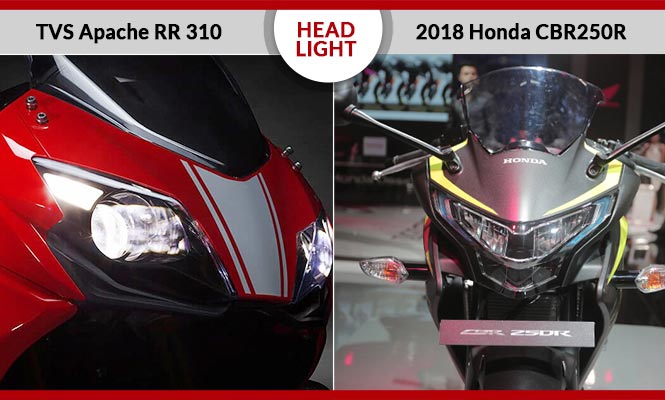 in terms of pricing, the ABS-equipped Apache RR310 model is INR 22,000 premium over the 2018 Honda CBR250R at INR 2.15 Lakh. that clearly gives a benefit to the CBR250R. Whereas, the non-ABS variant for CBR250R is priced at INR 1.63 lakh that helps in opting the motorcycle without any doubt for the cost concerned buyers.

comparatively, the Honda sell its ABS option of cost INR 30,000 as opposed to the facility being offered by different manufacturers at INR 14,000. That will make the audience to choose the non-ABS variant and the same will get a major sales by the end of the year.

All the prices are applicable at authorized Delhi dealerships.