the "Year 2020" which has already been announced as a benchmark or milestone to switch between mobility from the combustion engine to motor-battery setup. As per the belief, the Indian automotive industry will meet the same around said time. Several vital/considerable aspects like the air pollution and skyrocketing fuel prices (Petrol and Diesel) are pushing the industry to get in position to handle those transitions. A number of EV makers are rooting selves to get juicy, delicious fruit at the right time.

One of them, is Ultraviolette Automotive Pvt Ltd, a Bengaluru based start-up developing an Ultraviolette electric bike. The flagship electric motorcycle is being claimed to the fastest and most powerful e-bike in India with the top speed of 150km/hr. It is faster than the Duke 200, one of the high in demands naked streetfighter in Indian biking Industry. The Ultraviolet EV’s arrival is expected during the second quarter of 2019. However, it will be an expensive offering with the price tag in 200-250cc combustion bikes available. 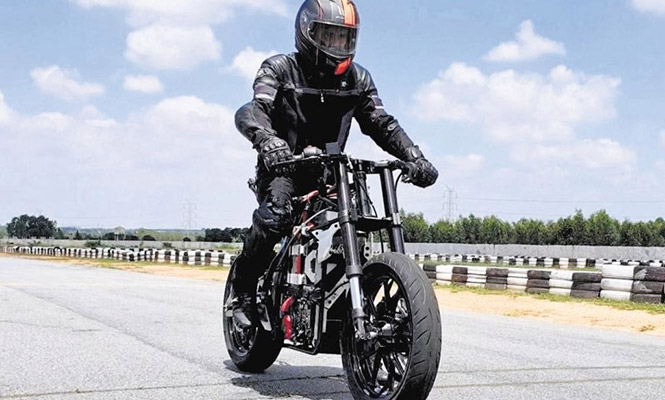 The Concept Ultraviolet was first come to existence in June 2016. Further several tests were performed to examine its capability under different weather and road conditions with the distance travelled over 10,000km.

Other than this, the power source-the lithium-ion batteries are one of the most researched aspects as it plays a vital role in increasing range, efficiency and energy density. As claimed, the equipped batteries are capable of endowing travel range of 150kms.

Going to be one of the strongest contenders in the coming future, the Bengaluru based startup will file for nine utility patents including bike’s technology and engineering. In addition to this, an app will also be developed which will offer facilities such as preventive maintenance, remote diagnostics and over-the-air updates.

The Ultraviolet receives INR 11 crore funding as against to a 25.76 per cent stake in the start-up. The invested amount will be utilized to set up a production facility in early 2019 in order to build 10,000 vehicles per annum. Initially, the flagship electric bike will be available for the Bengaluru crowd as it will be the only city with infrastructure favourable for electric vehicles. Further, it will spread over other metro cities.

In the segment, the Ultraviolet will pit against the Ather Energy, start-up supported by Hero MotoCorp Ltd. Also, with the electric two-wheelers developed in association with renowned brands like the Royal Enfield and Bajaj Auto. it’s a clear sign that our country is moving towards the greener, cleaner and better future of mobility.