Here is the possibility that the Japanese giant, Honda is silently working on a small capacity naked sports streetfighter. As the viral patent images of the future design compact engine motorcycle also tend to believe that something interesting is going on at Honda production facility. Apparently, the motorcycle will built on the homogeneous naked motorcycle platform and perhaps carry the same engine specifications of the recently launched 160cc, Honda CB Hornet 160R.

If it boasts the same 162cc, air-cooled engine that powered the Hornet 160R then the placed engine will churn out the maximum power of 15.7bhp and peak torque of 14.76Nm and five speed transmission gearbox will propel the all extracted power to the rear wheel. Similar Honda 160R diamond frame is likely to bare the complete body weight of the patent image motorcycle. The telescopic front fork and monoshock at rear may be the suspension setup and disc brakes at both wheel will taken care the stopping responsibilities. 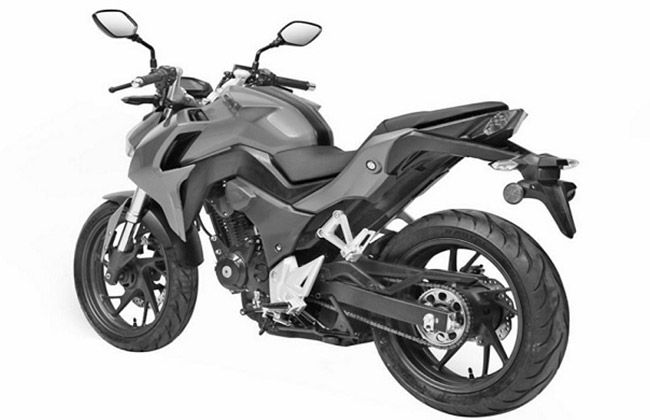 Visually, the revealed body detailing make it stand out from the rest. The front end collaboration of sharp headlight and the fuel tank that has been chiselled according to the headlamp to give it an aerodynamic along with aggressive look. The motorcycle will be featured with clip on handlebar at the place of flat handlebar of the Hornet 160R, muscular fuel tank, Euro 4 norm compliant exhaust, broad rear tyre and multi spoke wheel. The clip on handler, centre positioned footpegs will give it the perfect naked sports dynamic riding.

The automaker already have two products The Honda Unicorn 160 and Hornet 160R are already present in the 160cc segment in India. so the entry of naked sports is not possible anytime soon. Once the motorcycle introduced in the domestic market, the motorcycle will go head to head with the current popular naked bikes like Yamaha FZ-S, Bajaj Pulsar 200 NS and the recently launched TVS Apache RTR 200.