As announced from a Mumbai dealer, ANZEN Kawasaki Mumbai is offering a discount of INR 20,000 on the newly launched Kawasaki Ninja 400. At launch, the motorcycle was introduced at the price sticker of INR 4.69 lakh, ex-showroom, that was criticized by the audience as the elder sibling Ninja 650 is being offered INR 70,000 costlier than the bike in question.

The buyers who have registered their bookings in April 2018 will be benefited with this deal that will bring down the motorcycle’s on road price at INR 5.76 lakh at the Mumbai.

Go by the name, the Kawasaki Ninja 400 is the improved iteration of the earlier Ninja 300 that is evolved in displacement, power and torque. Bolted behind the fairing, the brand new 399 cc twin-cylinder liquid-cooled engine that is rated to spits out the maximum power of 45PS along with 38Nm of torque. The company claims the motor that is mated to a 6-speed gearbox with the slipper clutch, is capable of providing outstanding performance across the torque range. And that is possible owing to the availability of predecessor’s smooth throttle response and rider-friendly character. 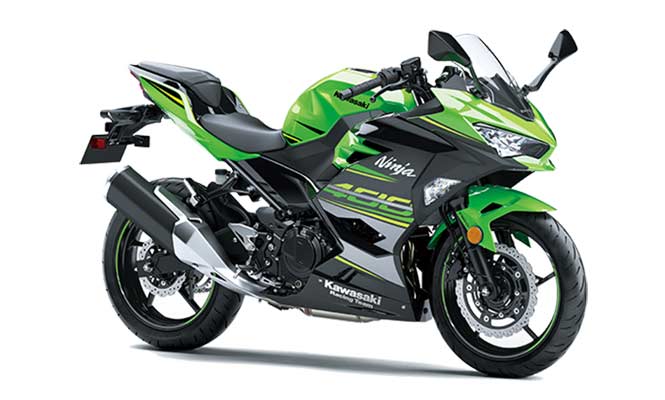 Besides powertrain, the underpinned chassis is also a new steel trellis unit that helps in reducing weight by 6kg and stand it out at 168kg. On the suspension front, the Ninja 400 incorporates inverted telescopic front fork and rear monoshock. While the braking power comes from larger in segment front disc of measure 310mm. The Nissin sourced ABS sports in braking too.

Apparently, the design has been altered which appears influenced by the Ninja H2 in the segment such as front fascia, massive sculpted fuel tank and the sporty rear end. As per the company, in this scenarios, their focus was on offering wind protection to the rider.