Kawasaki Ninja 400 vs Ninja 300: Which One Would You Choose?

Kawasaki Ninja 400 that was showcased for the first time in front of the global audience at the Tokyo Motor Show in 2017, has finally been introduced in the Indian lineup. Earlier, the model was expected to replace the ongoing Kawasaki Ninja 300, which had been updated early last year in order to comply with more stringent BS-IV emission norms. In addition to that, the 2017 Kawasaki Ninja also received new paint scheme, a gigantic grab rail and fatter tyres.

As both the Ninja variants in different displacement category are available in Indian portfolio, the question arises which one would be preferred by the desirables. Here we are presenting a brief comparison of both the motorcycles that will support you in making the decision.

Kawasaki Ninja 400 that appears larger as like its 600cc supersport model, shares design inspiration from the Kawasaki H2. it is being offered in a single colour option of Green that is complemented by KRT (Kawasaki Racing Team).

On the other hand, the Kawasaki Ninja 300 is slightly tweaked to looks more intense and aggressive as compared to its last model. The bike benefited with new livery-new decals shared from the larger displacement Ninja supersport model. The introduction of a gigantic grab rail, pair of fat tyres make the bike looks more promising. 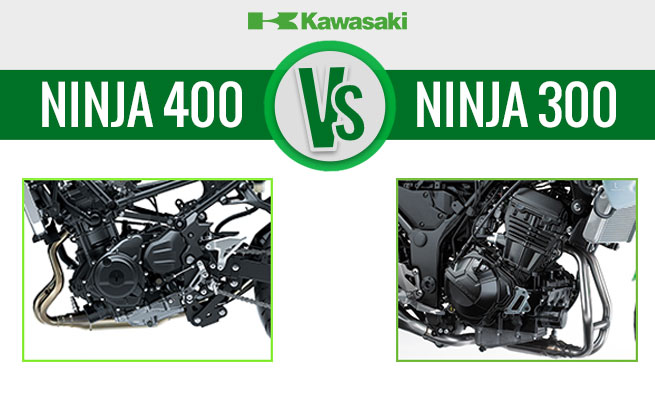 Under the fuel tank, the Kawasaki Ninja 400 comes fitted to a 399cc liquid-cooled parallel twin motor. Mated to a six-speed gearbox with a slipper clutch, the engine is capable of rolling out the maximum power of 49PS at 10,000rpm along with 38Nm at 8,000rpm.

On the other hand, the Kawasaki Ninja 300 uses a 296cc, liquid-cooled, four stroke, parallel-twin mill. In association with a six-speed gearbox with assist and slipper clutch, the engine churns out the monstrous power of 38 bhp at 11,000 rpm and the peak torque of 27 Nm at 10,000 rpm. Furthermore, the introduction of dual throttle valve offers the linear throttle response across the rev range via precisely controlling the air intake. 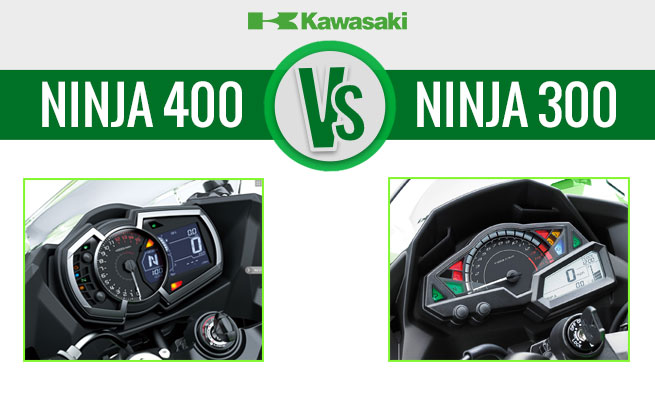 At the skin, the Ninja 400 obtains LED tail lamp, inspired by the Ninja ZX-10R along with the sourced instrument cluster from the Ninja 650.

Based on an all-new trellis frame, the sport bike mounts on a 41mm front telescopic forks and a rear gas-charged and linked monoshock damper. Whereas, for deceleration, the motorcycle maker offers a single 310mm front disc and a 220mm rear disc. The front disc is the largest unit being provided in the segment, in integration with the cutting edge ABS technology feature.

On the other side, the Kawasaki Ninja 300 got suspended on a 37 mm telescopic front fork with the travel distance of 120mm and a uni-track gas-charged shock with 5-way adjustable pre-load. The braking duties are handled by a single 290 mm petal disc at the front, and a 220 mm petal disc at the rear. Both the disc units are anchored with dual-piston callipers

Price: In India, pricing is the major concern for consideration before purchasing a bike. The Kawasaki Ninja 400 is launched at the price tag of INR 4.69 lakh. Whereas, the Ninja 300 is available on sale at the price sticker of INR 3.64 lakh. Both the prices are applicable at Delhi dealerships.

Verdict: The Kawasaki Ninja 400 is an expensive variant as compared to Ninja 300. The budget concern audience will definitely go with the Ninja 300. While, the desirables who do not have any issue with the pricing of the motorcycle and seeks for power, performance and advanced features, will choose the lately launched Kawasaki H2 inspired, the Ninja 400.