The 2019 Kawasaki Ninja ZX10R range which consists of variants like ZX10R, ZX10RR and ZX10R SE has been introduced globally. As a part of updation, the motorcycles received cosmetic updates in the form of new colour and graphics job along with the addition of a host of technical bits. The improved range of Ninja ZX10R series is probably to mark its presence at the dealerships in international markets by the end of this month.

The 998 cc in-line four-cylinder unit placed behind fairing underneath fuel tank observed the most important update in the form of redesigned valve train which is now getting lighter by a good 20% with the employment of finger follower camshaft. Consequently, the engine which gets a redesigned cylinder head can now rev higher than earlier. A red-painted cam cover makes the updated engine easily recognizable.

Out the three, the ZX-10RR is a homologated race version. It gets a special treatment to its motor which now uses titanium connecting rods, reduces weight by 400 grams along with makes engine revs higher by 600 rpm. This alteration is beneficiary for the WSBK machine. With the mentioned updates, the improved churn stands at 202.8bhp as compared to 200 bhp of the maximum power of the outgoing version. On the other side, the race-ready ZX10RR witnesses the power generation of 201 bhp without ram-air intake, 1 bhp more than the last model. 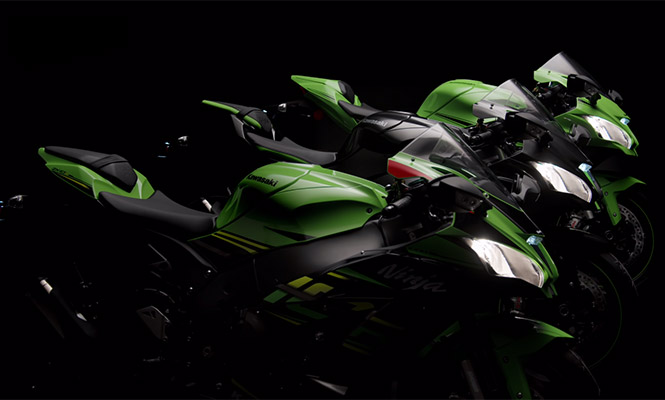 All the three variants underpin similar chassis that get suspended on an adjustable inverted telescopic front fork and rear monoshock unit. Though, the top end ZX10RR gets reworked suspension for improved handling on the racetrack. While the introduction of a bi-directional quick-shifter is one of the major highlights on the updated 2019 Ninja ZX10R.

Aesthetically, besides the introduction of revived colour schemes with sticker jobs the 2019 Kawasaki Ninja ZX10R series witnessed nothing. The standard model now sports a KRT livery (black-green) with red accents on the belly and on the top edges of the front fairing. While, for the Ninja ZX10RR, the brand is offering a single colour option of Kawasaki green with black lettering.

The funky Ninja ZX10R SE is draped in similar black livery with sporty green accents as similar to the previous model, though these green accents are now found on the seats as well. Moreover, the SE uses the brand’s Highly Durable Paint technology that is capable of healing minor scratches itself.

As of now, the Kawasaki did not announce its India launch, though we can expect the same as the Ninja H2 range which was introduced post a few weeks of its global debut. For pricing, we could witness a premium over the price of outgoing range for a few added features.