KTM 125 Duke, the latest offering in the Duke range has been launched in India with ABS. The entry-level Duke in brand’s Indian lineup is priced premium at INR 1.18 lakhs that is expensive as compared to its rivals in segment. Here in this post, we are comparing this newcomer with one of the most renowned naked streetfighters in Indian biking industry. Have a look at how this newbie will depend against opponents on paper specs comparison.

The styling aspect that’s common among bikes in comparison is aggressiveness. All are fierce naked streetfighters. In terms of designing, the KTM 125 is the derivative of the 200 Duke with minimal bodywork, angular body panels and new sticker job for the model year 2019. The TVS Apache RTR 200 4V, on the other hand, is a typical street fighter inherited from Draken concept. It features sharp body panels with creases across the bodywork. Meanwhile, the Bajaj Pulsar NS 200 that is range’s top of the line variant is also one of the formidable opponents in the category with an angular headlamp, bulbous fuel tank, split seat and rear broader tyre. 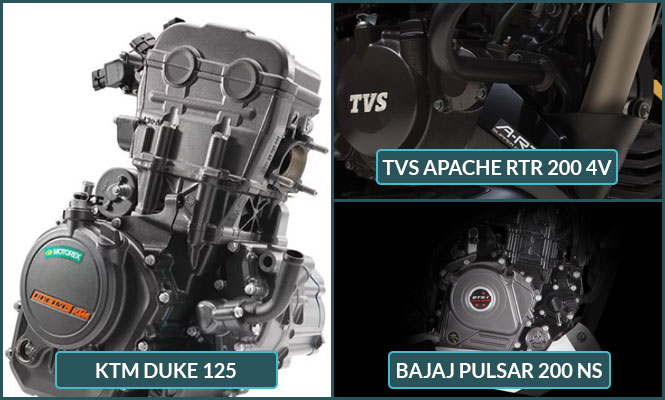 At the propelling heart, all three of the bikes bolt engines with different displacement range. The KTM 125 Duke features a 124.7cc, liquid-cooled, single-cylinder motor, capable of rolling out 14.3bhp at 9,250rpm and 12Nm at 8,000rpm. With such power figures, it is the most powerful motorcycle in the available range of 125cc bikes in India. While the TVS Apache RTR 200 4V is powered by a 197.75cc, single-cylinder, oil-cooled, carburettor motor churns out 20.4bhp and 18Nm of torque. The adjacent competitor Bajaj Pulsar NS 200 uses slightly more power of 23.5 bhp and 18.3 Nm from the 199.5 cc single-cylinder, liquid cooled, 4-stroke engine. The transmission duties on later mentioned products is handled by a six-speed gearbox unit while the former performs power transmission from a five-speed gearbox unit.

The KTM 125 Duke that recently joined the race in Indian naked streetfighter market is based on a trellis frame whereas it got suspend over 43mm USD front forks and adjustable rear monoshock. The braking power for the smaller Duke comes from a 300mm front disc and a 230mm rear disc incorporated with a switchable single-channel ABS as standard fitment. 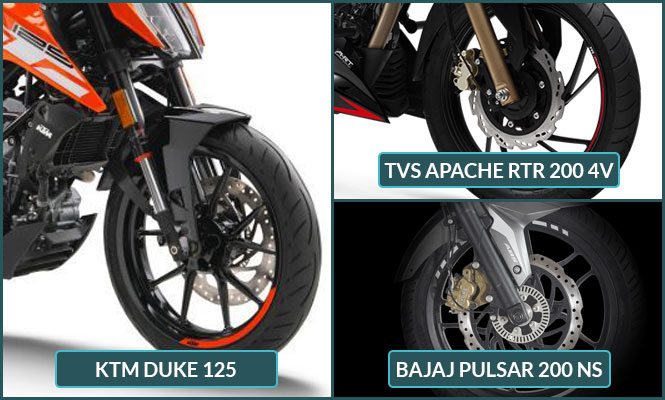 The other two bikes in competition check are mounted on telescopic forks up front and a rear monoshock. The Apache is armed with a 270mm disc unit at the front along with 240mm bit at the rear wheel. On the Pulsar NS 200, a bigger 300mm disc at the front and a 230mm rear disc in combination with a single channel ABS are responsible for braking performance.

In terms of equipment favourable for ride-related information, the KTM 125 Duke and TVS Apache RTR 200 4V, both are furnished with a full-digital instrument cluster. Intended to offer comprehensive ride information, the 125 Duke’s instrument console does not provide lap timer and a top speed recorder, being offered with the Apache 200. The Pulsar NS 200 houses a semi-digital instrument cluster with a bigger analogue tachometer and small display (for speed, time and distance travelled) along with other indicators on either side.

The aspect considered majorly in the Indian market ahead of choosing a bike. This factor is costliest for the 125cc bikes in India at INR 1.18 lakhs. The other models are tagged with the price stickers asking for INR 1.08 lakhs for the Apache 200 while INR 1 lakhs for the Pulsar NS 200. All the mentioned prices here are applicable at the Delhi dealerships.