KTM 390 Duke, the top-of-the-line Duke model indexed a downfall of 69 per cent in monthly sales of December 2018. As per the surfaced sales report, the company managed to sell only 106 units of the 390 Duke last month as against to 340 units disposed of in December 2017. It is not the first month when the recorded sales of Duke 390 is low on Year-on-Year basis. The model is witnessing the same since a few months. The recent launch of aggressively priced 650 Twin could be one of the reasons behind as the competition in the segment has increased to new dimensions.

The KTM 390 Duke was updated with the next generation equipment and technology in 2017. In its all-new body language, the bike stands apart in the crowd. It gets a sharp LED headlamp setup that sharpness continues to the rear section with the presence of sculpted fuel tank, body panels and rear section. The seating on the new generation Duke 390 is split seat up unit. The instrument cluster is a fully digital unit with Bluetooth connectivity and showcases all the required readouts for the riders. 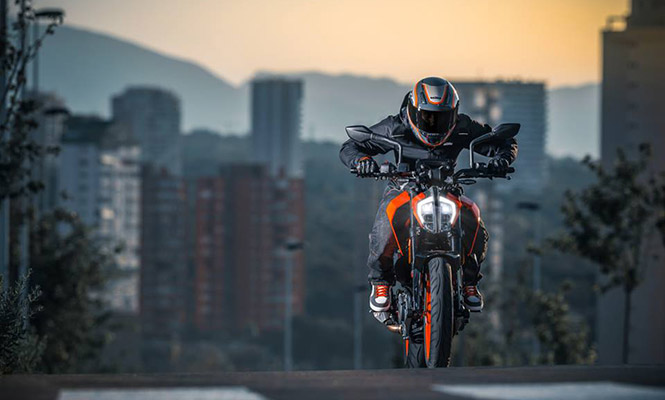 Being offered in two colour schemes of Orange and White (Introduced last year), the 390 Duke has also received a mid-life update in the form of a small heat shield in the trellis frame for better heat dispensation. In addition to this, the software has also been updated to resolve phone pairing and headlamp issues. Powering for the KTM 390 Duke comes from a 373.2cc single cylinder fuel injected engine. In association with a 6-speed gearbox, the engine is rated to develop 43.5 PS of power at 9,000 rpm and 37 Nm of peak torque at 7,000 rpm. In addition to this, the naked streetfighter comes packed with a host of cutting edge technological aspects including ride-by-wire throttle system, slipper clutch and new adjustable brake and clutch levers.

The onboard cycle parts consist of a 320 mm disc with a four-piston radially armed calliper and a single piston with floating calliper 230mm disc at the rear, for braking responsibilities. While an association of a 43mm USD fork and a monoshock at rear completes suspension setup. If the pricing is concerned, the KTM 390 Duke is on sale at an introductory price tag of INR 2.43 lakh (Ex-Showroom, Delhi).