KTM Adventure 390 is an upcoming project from the Austrian bikemaker. The adventure tourer is in news from a quite long while and is reported to launch soon in near future. The KTM 390 Adventure is crafted on the chassis is in use of brand’s flagship naked performance, KTM Duke 390. Reportedly, it has been known that a Pune-based custom shop, Autologue Design is working on a body kit that will transform the Duke 390 into an adventure tourer. The envisioned images of same have been surfaced and hinting the outlook post customization.

The adventure tourer body kit will sport the KTM Duke 390 owners, who are willing to customize their bikes as per the need of improving distance touring capability. The custom-made semi-fairing that is crafted around the stock LED headlamp unit is one of the major bits of the body kit. It also gets a tall windshield that prevents the air burst on long-distance touring. 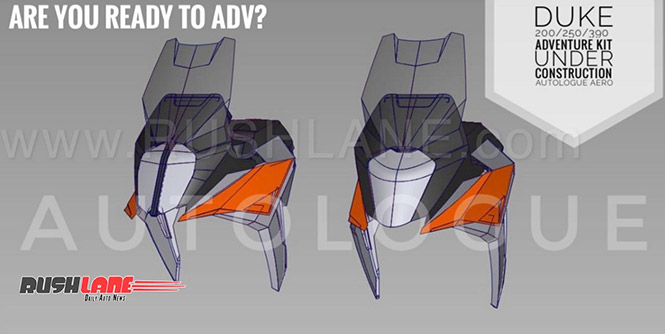 The furnishing of the fairing is that neat, it makes us believe of being provided as a stock unit to the bike. Other than this, a raised handlebar can also be provided in order to offer an upright riding position of the adventure tourer. Besides, these elements, nothing will be provided as a part of the body kit. It can also be used with the bikes in the Duke range like the Duke 250 which features similar design and styling philosophy.

Mechanically, the bike remained untouched. It gets the propelling power from the similar 373cc, liquid-cooled single-cylinder engine. It comes mated to a 6-speed transmission, that helps in transmitting all the generated power of 43.5 PS along with 35 Nm of torque to the rear wheel.

With such additions, the bike’s power-to-weight ratio varies though not that much, it would affect the performance of the motorcycle.

The underpinned elements on the Duke 390 consists of hardware including a trellis frame that is mounted on an inverted telescopic front fork and rear monoshock. Both the disc brakes in association with ABS performs braking on the 17-inch alloy wheels wrapped up with Metzeler tyres. In addition to this, the Duke 390 features a fully digital instrument console for conveying ride related information.

The KTM Adventure 390 is expected to be brand’s next, is likely to showcase globally either at INTERMOT 2018 in Cologne next month or at EICMA 2018 in Milan in November. It will be packed with all the essentials for the adventure tourer like long travel front suspension, larger front wheel, dual-purpose tyres, semi fairing, etc. we could see sort of refinement done on the engine and gearbox suited to adventure touring.