2017 will embrace a host of new updates on the entire range of KTM models including the KTM 1190 Adventure, the test mules of which have been captured on camera last week. Two sparsely camouflaged prototypes of the newest member in the 1190 range were undergoing test runs outside an Austrian factory. Apparently, the brand is going to present some serious upgradations in its design philosophy along with the technical alterations. Despite the mules being heavily disguised, a precise silhouette gives a clear hint of company’s fresh styling idea for the 2017 line-up.

To make the models Euro-4 compliant, modifications have also been done in the powertrain. What we have figured out as the most noticeable change even from the highly disguised body is the bike getting rid of the current 1190 Adventure’s spoke wheels. Moreover, the model, this time, gets an all new fairing, an elongated windscreen and new LED headlamps.

Additionally, the dual sport tyres, sturdy panniers with an extra space, 21-inch front and 18-inch rear spoke wheels are a couple of new enhancements to extend its capabilities. The repositioning of air-intakes will improve the ventilation. If reports are believed to be true, KTM may impart color TFT screen for the instrument cluster. 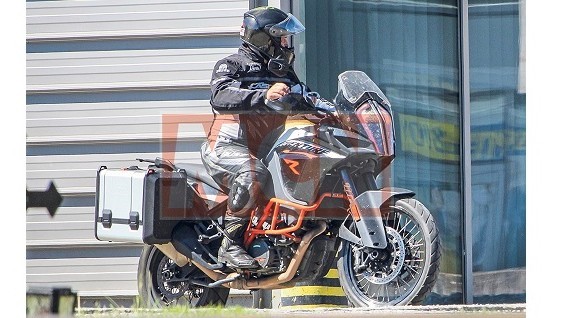 Retaining the 1195cc V-Twin engine under its skin, the upcoming KTM 1190 Adventure will sprint at a power of 150 BHP, however, slight changes in the engine could be seen to achieve the Euro-4 emission norms.

When it comes to the electronic package, you’ll get to see four riding modes, cornering ABS and three-levels of traction control. Manually adjustable WP suspension will be a standard fitment as well.

Have a look upon: Near Production Ready 800cc KTM Spotted While Testing In Austria

The 1190 Adventure sportster first came into existence in 2013, afterward, many of the other modifications were a part of its journey. But, nothing big like this has been witnessed till date. Though, the picture is pretty much clear now, still, we’ll keep you updated with whatever new or modified stuff comes to the way.

No official announcement by KTM has been done, however, reports from inside reveal that the new model will be premiered at the Intermot show in Cologne in October. Expect these bikes on sale after the first quarter of next year, probably including the 800 Adventure variant as well.