The KTM RC 200 Special Edition that seems not less than a showstopper has spotted at an authorized dealership. It indicates that the limited edition sports tourer is about to launch soon.

KTM India that is considered as one of the profitable arms of Bajaj Auto always opts to bring new products and ideas to the market. These strategies not only made the brand desirable for the performance bikes lover but also supports the brand in competing with the opponents in the segment.

The considerable difference on the bike is cosmetics, while no mechanical changes have been made by the brand. The similar 199.5 cc, single cylinder engine that performs powering duties on the outgoing models will come loaded underneath the fuel tank. The said mill is rated to generate the maximum power of 25hp and the peak torque of 19.2 NM through a mated 6-speed gearbox. 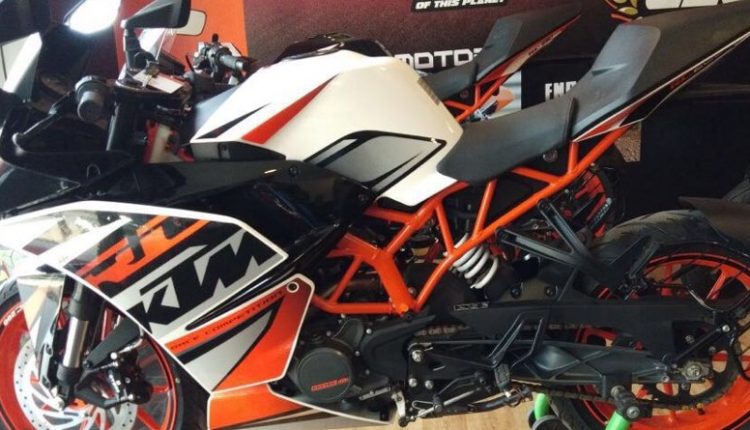 While, on the cosmetic front, the limited edition RC 200 gets new sticker job across the bike. The fairing that gets monikers the KTM in Black and RC in Orange give the feel of all new fairing. Other than this, the bike could also get ‘race competition’ written beneath both the monikers. Other highlighted components of this special edition KTM RC 200 includes its White finished fuel tank, Silver polished lower panel that helps in providing the bike a premium sports bike look and the angrier than ever front fascia that sports smoked visor as a standard fitment. The seating is all similar as of the regular RC model with the rear seat that seems like a black cowl.

Other than this special edition KTM RC 200, we could also expect this limited edition treatment for the much powerful RC 390 model. Though, anything like it not came into gaze till now. If the pricing of the special edition KTM RC 200 is considered, it could get a premium of INR 3000-4000 over the standard model. To know more about this upcoming stay connected with us.