The Mahindra Gusto is an all new automatic scooter offering from the automaker in the market. And now it seems that Mahindra Two-wheelers is all set to bring a new top-end variant with disc brake facility to the masses. A prototype equipped with disc brake on the front wheel (not visible in the spy shot produced by Indiancarbikes.in) spied while its test mule in Pune. Apart from the disc brake, there was no dissimilarity except its paint livery in the scooter from the current Gusto, And the red paint on the number board is the evidence of the development of something new at the company’s R&D facility to provide diversification to the Gusto lovers.

The disc brake facility is likely to be fitted to the both 110cc and 125cc variants of the Gusto and may be furnished with the all top end variant features for rider’s ease. The stocked highlights may consists anti-theft system, find-me lamps, guide-me-home lamps, remote flip key and height adjustable seat which is really a good feature for short heighted riders. 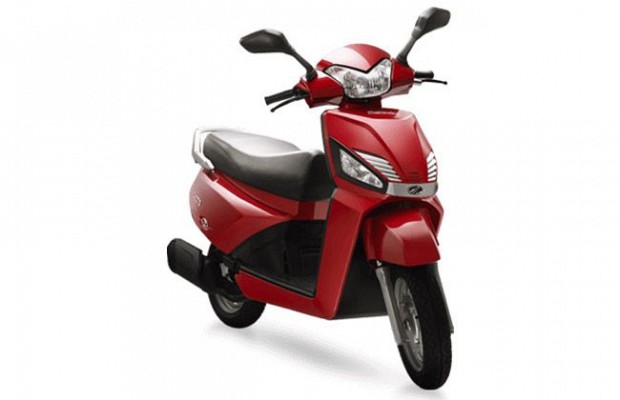 The 110 cc variant gets the propelling power from a 109.6 cc, air cooled, 4-stroke, M-Tec engine which pumps out 8 hp max power and 9 Nm of peak torque. While the 125cc variant is powered by a 124.6cc, air-cooled, 4-stroke, M-Tec engine that produces the power of 8.5 hp and torque of 10 Nm which is more than from the 110cc variant. Altogether both the variants uses CVT transmission to transfer power to the rear wheel.

The Mahindra Gusto 110cc is available in three variants of VX, HX and DX and priced in the range between Rs. 45,410 to Rs. 49,410 and 125cc Gusto comes only in two variants of VX and DX. If both the 110cc and 125cc variants will get the disc brake then it will be equipped in the VX variants of both and be priced approximately Rs. 2000 higher than the current price of the scooters.