In October 2018, Maruti unveiled the two sports concepts that were primarily based on the Baleno hatchback and the Ertiga MPV. Recently, the production of Suzuki Ertiga Sport has been completed by Maruti Suzuki and sooner the company will showcase the sports variant of its popular luxury hatchback, Baleno in India.

The Baleno Sport was unveiled at the GIIAS (Gaikindo Indonesia International Auto Show) back in 2018 sporting a murdered-out all-black look, along with highlighted red side skirts and front and rear bumpers. An all-new alloy wheel design was seen in the car, but the tyres have failed to meet the 195/55 R16 tyre standard found on the India-spec Maruti Suzuki Baleno RS. Although, this was due to the fact that the sports iteration was based on the pre-facelift Baleno model. 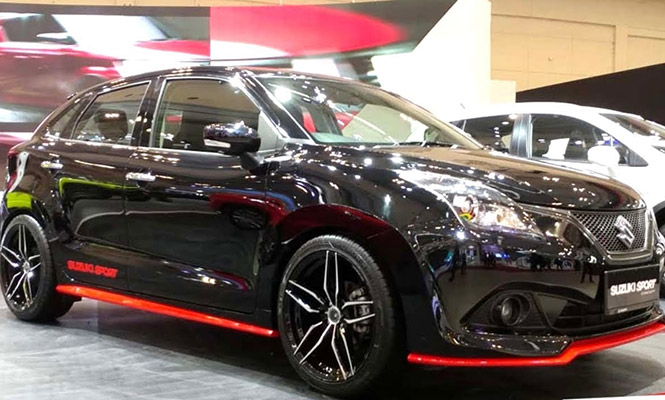 As per the company sources, the Baleno Sport specifically launched for the Indonesian market will be based on the facelift versions of Baleno and Baleno RS that was launched in India at the start of 2019. This means that the sports variant will come up with tweaked fog lamp clusters, new LED headlamps, new grille, and a revamped design. We are also expecting a different upholstery and a new 7-inch SmartPlay 7.0-inch touchscreen infotainment system inside the hood of the car. These changes almost look certain to give a new interior look to the car.

Similar to Suzuki Ertiga Sport, the upcoming Baleno Sport is not expected to come with any major mechanical changes. As far as the Indonesian market-based Baleno Sport is concerned, a 92hp, 1.4-litre petrol motor along with 5-speed manual or a 4-speed torque converter automatic options were available. Although, for the Indian market, Baleno Sport will come up with similar mechanical specs like the facelift Baleno RS.