A prototype of the KTM 1290 Super Duke R has been spotted performing its test runs. It could be the updated version of this power naked with several changes. Expectations are the motorcycle will follow the upcoming Euro 5 emission norms that are likely to come into effect in January 2020. Under the new emission norms, the motorcycle has to emit 30 percent lesser pollutant particulates as compared to the ongoing emission norms.

Aesthetically, no alteration is witnessed on the new Super Duke R. Whereas, at the powering front, the engine will get countable updates inside as a new addition. The availability of a larger radiator grill hints heating issue on the new Super Duke R. in addition to that, a new catalytic converter is placed beneath the sump. The underpinned chassis has also been tweaked. The main frame is redesigned unit and the subframe become a box section instead of aluminium trellis used in the outgoing model. 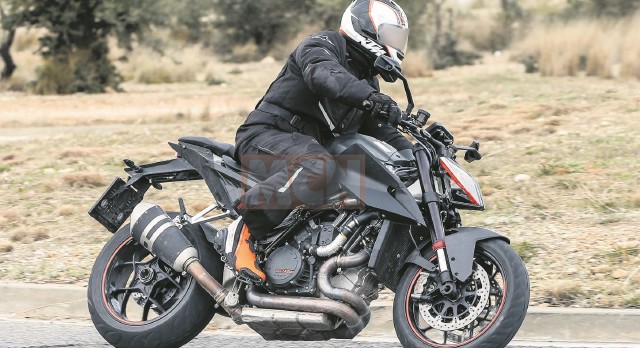 Furthermore, the bigger duke prototype appeared with a new single-sided swingarm and suspension. The test mule was furnished with a suspension linkage instead of a direct mount shock of the current model.

It is expected that the new KTM 1290 Super Duke R will debut at the 2019 EICMA and further launch by early 2020. Its chances to hit the Indian ground is in darkness as the Bajaj has no plans of introducing bigger Duke anytime in the country.