A low cost cruiser from UM that was in news few weeks earlier owing to the under development a new 230cc engine, has recently been spied near UM’s Pantnagar factory in Udham Singh Nagar district, Uttarakhand. As per the speculations, the motorcycle will be christened with Renegade Duty 230 moniker and will mark its presence in front of Indian audience at the impending 2018 Auto Expo in February. In the segment, the model will compete with the likes of the newly launched Suzuki Intruder 150 and the segment leader Bajaj Avenger 220.

According to the sources, the vehicle is expected to be loaded with a 230cc motor. This single-cylinder, air-cooled motor is speculated to churn out the maximum power of 18bhp with the support of a 5-speed gearbox. 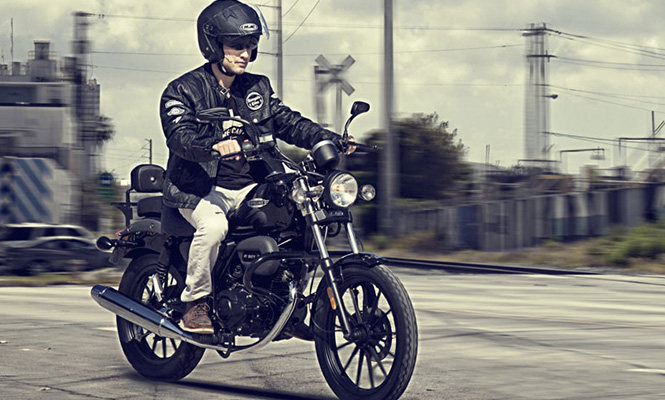 In terms of styling, this new UM cruiser carries low slung design language as compared to its rivals. Moreover, the flat handlebar equipment offers straight up riding posture. In addition this, the Renegade Duty will come with the attributes such as a retro round shaped headlamp and a single pod instrument console with a digital display. The suspension setup on the test mule was comprising conventional telescopic front forks along with twin rear shock absorbers. While, the braking was in the supervision of front disc brake and rear d drum.

A quirky thing that was observed on this low-cost UM cruiser was the fork-mounted LED lights which is likely to be called ‘360-degree LED light system’ by the UM Motorcycles. The manufacturing of the Duty will be taken care by the brand’s Uttrakhand based manufacturing unit while the market ready model will be priced around the Rs. 1.2 lakh mark (ex-showroom).