Maruti officials confirmed that the new 1.5-litre K15B petrol engine with SHVS tech will be launched in CNG variant in 2019. With a CNG unit in the mix, the new-gen Ertiga’s combined fuel efficiency might exceed 22.8kmpl.

The Corporate Average Fuel Efficiency (CAFE) rules and regulations will soon be implemented and will have CNG variant which will minimize the emissions across the product range. We expect more and more companies to manufacture CNG variant as Maruti did and follow its footstep.

Maruti Suzuki the Indian car manufacturer has finally unveiled the second-generation of Ertiga after a long period of wait. In India, The petrol- engine variant of second-generation Ertiga comes with a price tag of 7.44 lakh, while the diesel variant has been priced at Rs 10.90 lakh. The next-gen Ertiga is available in ten options (including four petrol- versions four diesel version and two petrol-automatic ) which the buyers can choose as per their feasibility. To book a new Maruti Suzuki car, there has been a tentative waiting period for two to four weeks for all the petrol and diesel versions. The next-gen Ertiga comes with an improved set of specifications and looks bolder in terms of design.

The new Ertiga being offered by Maruti Suzuki is based on the Heartec platform and the company takes major inspirations from a range of Maruti cars in India namely Swift, Dzire, Ignis and Baleno. The new MPV is about 10-20 kg less heavy than the current model. The next- generation of Ertiga is a 4,395mm longer, 1,735mm wider and 1,690mm taller than the outgoing model as well as it has a more space inside the cabin. The new Ertiga comes with a 45-litre capacity of the fuel tank and a turning radius of 5.2 metres. Next-gen Maruti Suzuki Ertiga has been launched in five color options including white, silver, grey, red and blue. 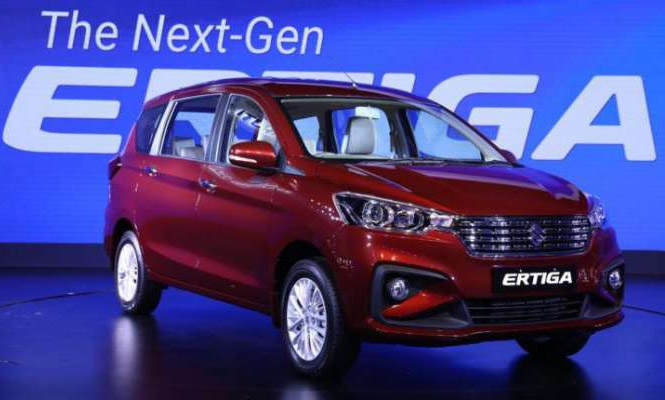 On another hand, the diesel engine variant of new Ertiga has a 1.3-litre diesel motor that delivers a maximum power of 90hp at 4,400rpm and 200Nm of torque at 1,750rpm.

Both, petrol as well as diesel engine option have been equipped with Maruti’s SHVS hybrid technology, which claims to render better fuel efficiency. The transmission duties of both engines are being carried out by a 5-speed manual gearbox. A 4-speed torque convertor is available only in petrol engine variant of Ertiga.

Dual airbags and ABS are available in all of the variants in new Ertiga , while with ESP and hill-hold function has been offered only on the automatic variants.  The basic features such as Diamond-cut alloy wheels and LED headlamps DRLs  are missing in the new Ertiga. 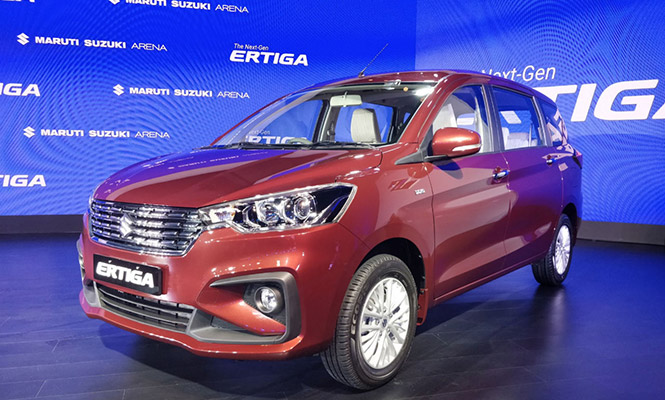 The pre- bookings of 2018 Maruti Suzuki Ertiga have commenced, though the car will go on sale at the end of the month. The MPV will be available for purchase at Maruti’s Arena dealerships and would compete against the likes of Mahindra’s Marazzo and Renault’s Lodgy in India.

2018 Maruti Suzuki Ertiga is specifically designed for the Indian market and the Ertiga was initially launched in April 2018. Since its launch, the company has sold nearly 4.2 lakh units of Ertiga.