The eighth-gen Toyota Camry Hybrid has been seen testing in Bengaluru, which is to be scheduled for launch in India in mid-2019. The rivals of next-gen Skoda Superb, Volkswagen Passat and Accord Hybrid will come with an all-new chassis design, more equipment and a reworked hybrid powertrain.

The new Camry has the same front-wheel-drive Toyota New Global Architecture (TNGA) platform with the recently launched Lexus ES 300h, though in the Camry, it is called the GA-K. This has helped in increasing the sedan’s dimensions compared to the current model, including a 50mm increase in the wheelbase, which now stands at 2,825mm. While it is bigger than the previous model, the new Camry’s weight has not increased and now gets better in-cabin insulation.

The next-gen sedan will be the most aggressive-looking Camry, based on Toyota’s new ‘Keen Look’ design language. It sports a V-shaped grille that couples the headlamps and a large air dam at the front. The sides feature prominent creases running from the front to the rear doors, while the boot gets lip spoiler. 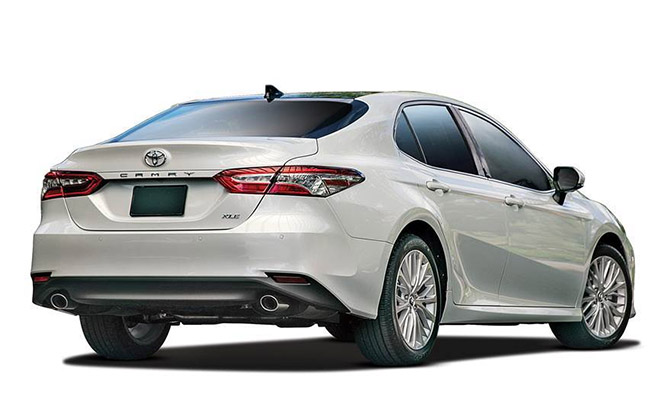 The new Camry’s cabin has been upgraded prominently. The current car’s drab dashboard is gone and a new sweeping design that is tilted slightly towards the driver has been replaced with it. A new 8.0-inch touchscreen infotainment system sits on top of the centre console. There’s also a new 10-inch head-up display and a 7.0-inch multi-information display in the instrument cluster. The internal boasts more soft-touch materials and will come with the segment-rivalling kit in the form of a wireless smartphone charging, dual-zone automatic climate control, nine-speaker JBL audio system, and cooled and power reclining rear seats.

There are 10 airbags (one more than the current-gen model) as the safety kit, a pre-collision system with pedestrian detection, dynamic radar cruise control and a lane departure alert with steering assist offered as standard.

As the new Camry is the current model, it is expected in hybrid form only. The 2.5-litre, four-cylinder petrol engine has been tweaked to now make 176hp and 221Nm of peak torque (an increase of 16hp and 8Nm). The interior combustion engine works in conjunction with a 118hp (88kW) electric motor, which takes combined output to a limited 208hp (an overall increase of 3hp). This petrol-electric hybrid system is mated to a 6-step CVT automatic gearbox that can be operated via paddle shifters and will have four drive modes - Normal, Eco, EV and Sport. Toyota has also added a new Auto Glide Control coasting feature which is meant to boost fuel economy. The current Camry prices at Rs 37.22 lakh (ex-showroom, Delhi), is expected to be 1 lakh Rs more expensive than the current model.