With the Year 2019, all the two-wheeler manufacturers in the country are engaged in updating their products with next-generation updates for ongoing calendar year along with the government mandated safety features. These new safety norms are slated to hit the country from April 2019 which mandates the armament of Anti-Lock Braking System (ABS) on the two-wheelers with displacement 125cc or above and Combined Braking System (CBS) on vehicles below-mentioned engine displacement.

Bajaj Auto India’s third largest two-wheeler manufacturer has refreshed majority of its products in the lineup with above-mentioned safety-net and other features as well. While the remaining are in the queue to blessed with new generation embodiments.

Lately, the automaker teased the Pulsar lovers with a new 180cc Pulsar variant named the 2019 Pulsar 180F. The motorcycle has the nomenclature from its elder sibling, the Pulsar 220F which has also been rolled out in the market in 2019 MY guise. Here in this post, we are presenting a closer look of the bike, the Pulsar 180 F along with a quick comparison from the big brother Pulsar 220F.

As per the surfaced piece of information online, the new Bajaj Pulsar 180F has hit the dealerships. Also, the unofficial bookings for the soon to be launch motorcycle have been commenced a few dealerships across the country.

Apparently, the Pulsar 180F is a Pulsar 220F doppelganger which clarifies one can confuse the former with the later. It is not the first time when Bajaj Auto updated its smaller bikes with parts and features shared from their elder siblings in the Pulsar lineup. The Pulsar 180F is also the same case and borrows bodywork and most of the underpinnings straightly lifted off the Pulsar 220F and the discontinued Pulsar 200.

How Pulsar 180 F differentiate from the Pulsar 220F?

Other than the addition of semi-fairing, the Pulsar 180F receives cosmetic upgrades in the form of contrasting graphic lines on the components like a headlamp and half fairing. While the rear gets contrasting grab rails and a 180F logo on the tailpiece. Moreover, there is a plastic belly pan fairing which is not even available on the current Pulsar 220. The loaded powertrain is a smaller 180cc single that misses out on an oil cooler. 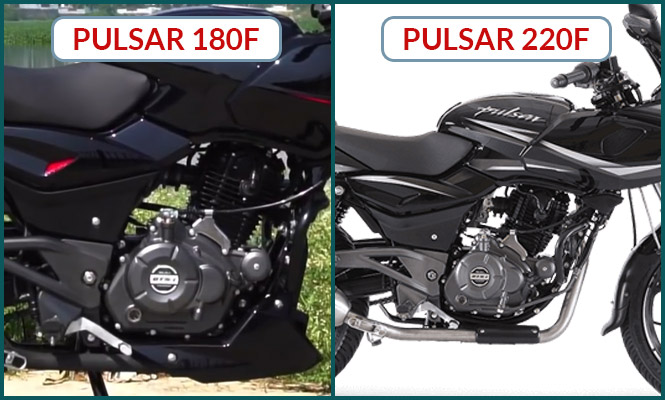 The Pulsar 180F with a semi-fairing borrows a 178.6cc air-cooled motor from its naked sibling. The rated churn from the mill is 17PS and 14.22Nm with the mated five-speed gearbox.

The suspension setup has undergone the knife with the inclusion of beefier front telescopic forks and twin shock absorbers at the rear. Whereas with the availability of discs at both wheels ensures safety for the rider and the pillion. However, the company misses out on an ABS that’s surprising as the deadline for the government mandate safety norms is coming closer. The motorcycle rides on fat MRF tubeless tyres which offer better high-speed stability and cornering confidence to the rider.

If the pricing is concerned, the new Bajaj Pulsar 180 F is INR 1,500 premium over the naked Pulsar 150 which is available on sale at INR 85,011 (ex-showroom, Pune). It turns, the Pulsar 180 F pricing INR 86,500 (ex-showroom Pune). Wherein, one will get an extra of half fairing with a projector headlamp setup which offers a better illumination as compared to other Indian motorcycles in dark scenarios. We hope the new Pulsar 180 F will help in boosting brand’s sales to newer heights.