The famed Royal Enfield Bullet and Classic 350 series which were available on sale with the front disc brake only, has now been updated with the rear disc brake. The first to undergo with this improved safety was the Classic 350 which has now been followed by the Bullet 350. For this rear disc Bullet 350 variant, the Chennai based manufacturer is asking for the retail amount of INR 1.26 lakhs – ex-showroom that reaches up to INR 1.52 lakhs for on-road pricing. The Royal Enfield Bullet 350 went online through an exclusive video shoot at a dealership in Nashik by Youtuber Abinash Panigrahi.

In the new Bullet 350, there is nothing new besides the rear disc brake and a revived swingarm unit. However, the swingarm unit in question is designed similar to the Bullet 350 on sale in global markets.Other than this, the Royal Enfield Bullet 350 continues to feature a 13.5 litres fuel tank, single seat, chrome accents on fenders, and 19-inch spoke wheels with tube type ceat tyres among others. As the company claims, the motorcycle can cover the distance of around 450 kms in a tank full while it has a kerb weight of 183kgs. 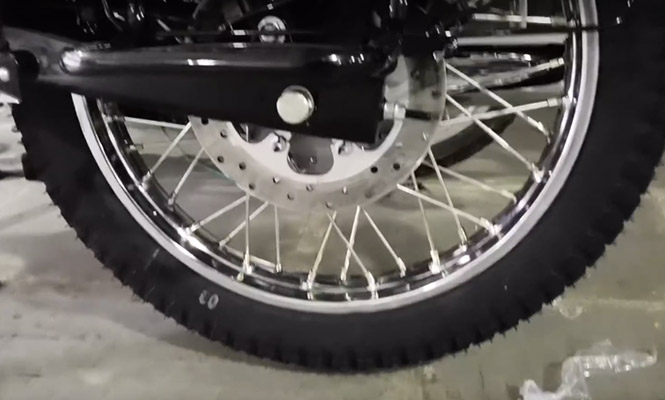 In the cycle parts, the telescopic forks up front and twin gas charged spring-loaded shock absorbers at the rear complete suspension setup. While the 280mm front and 240mm rear disc are there for braking. However, the ABS that is going to be a mandatory component from April 2019, is not a standard even an optional unit with the model. Well, there are chances we could see its addition soon ahead of the mentioned timeline.

In the market, Royal Enfield is offering the Bullet 350 in two variants-STD and Electric Start. For the standard variant, there is only a single Black shade on offer while for the top end Electric Start trims one can choose from the choices of colours like Black, Red and Silver.

Royal Enfield Bullet 350 Trails: What Else One Can Buy in Similar Pricing?
Views: 2272