Eventually, the day has come and the special edition model for which Royal Enfield send invites a few days ago has been launched. It is a new addition to brand’s Classic series and dedicated to Indian armed forces, specifically the Indian Army Corps of Signals. The new Royal Enfield Classic 350 Signals Edition which is introduced at the pricing of INR 1.62 lakh (ex-showroom, Pune), is the first Royal Enfield to get the advanced safety of ABS as standard. It is INR 15,000 costlier over the standard model.

The online bookings have been commenced exclusively on the brand’s official website. While the deliveries against bookings will be provided within a month. There are two colour options-Airborne Blue and Storm Rider on offer to select your choice.  Apart from the distinct paint jobs, the cosmetic bits which will pull the attention of the onlookers includes blacked out components headlamp bezel, engine, crankcase cover, exhaust shield, spoked wheels, and the handlebar as well. In addition to this, there are saddlebags, crash guards and large windscreen as optional fitment along with a single dark brown seat. On the fuel tank, a unique number of the limited edition is inscribed and the Corps emblem alongside. 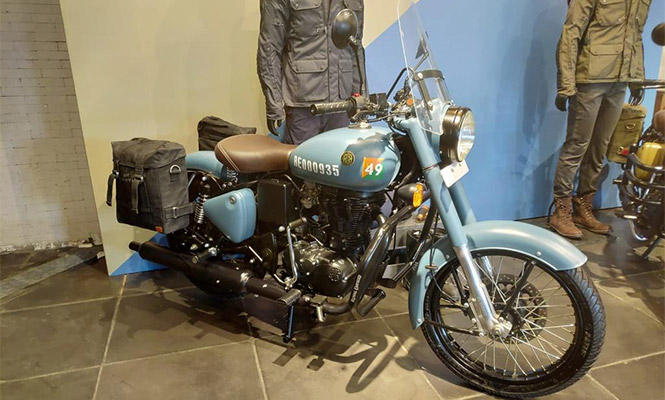 Beneath the fuel tank, the Royal Enfield Classic 350 Signals Edition gets the similar 346 cc single-cylinder, air-cooled engine of the Classic 350 standard model on sale. Well, the engine has electronically be tuned to generate the peak power of 19 bhp at 5250 rpm along with 28 Nm of peak torque at 4000 rpm. The power transmission will be managed by the 5-speed gearbox. The suspension on board includes 35 mm telescopic front forks and gas-charged twin shock absorbers at the rear. While the stopping power will come from the equipped set of a single disc up front and a drum brake set-up at the rear.

Royal Enfield Bullet 350 Trails: What Else One Can Buy in Similar Pricing?
Views: 1948