Royal Enfield Himalayan is not the genre for which the Chennai based automaker noted globally. Albeit the company is foraying into new segments and rolling out futuristic models at proper intervals to serve a vast variety of biking enthusiasts and masses.

It’s acceptable, Royal Enfield Himalayan has not been a runaway success model for the company though it provides a platform compatible for future products. Also, several issues related to the bike has already been resolved at the time country switches to BS-IV emission norms. In the coming future, we could expect a new more powerful variant of the Himalayan may be mid-2019. 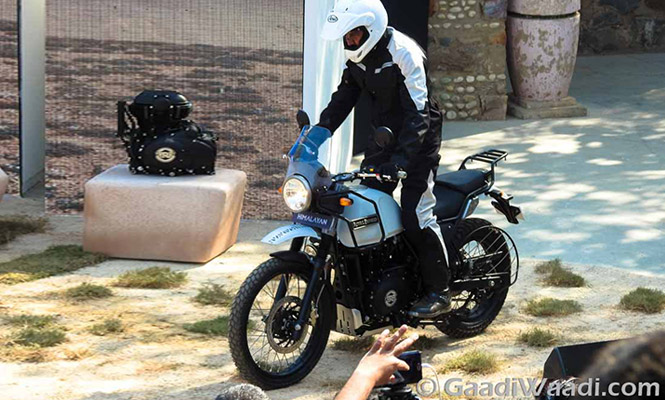 Underneath the fuel tank, the RE Himalayan gets a newly developed LS engine which was designed especially for the bike. A number of people complain about the bike’s underpowered and should get a more powerful engine to cater to this genre. In the news, the Himalayan is set to receive the powertrain from newly launched 650 twins, the Interceptor 650 and the Continental GT 650. The biggest powertrain under development- a 648cc, parallel-twin, air-cooled engine. This twin-cylinder powertrain is rated to roll out the maximum power of 47bhp at 7,100 rpm and 52 Nm at 4,000 rpm.

The ongoing Himalayan comes packed with a 411cc, single-cylinder engine which makes out 24.5 Bhp at 6,500 rpm and 32 Nm at 4,250 rpm via a mated five-speed gearbox. The future variant would be coupled with a six-speed gearbox.

RE Himalayan with bigger parallel twin engine could undergo the design changes at platform front. Well, the time will tell, the bike receives such alterations or not?.

The pricing for the upcoming Himalayan could be anticipated in the vicinity of 2.7 lakhs.

Royal Enfield Bullet 350 Trails: What Else One Can Buy in Similar Pricing?
Views: 2009