In the queue of updating product lineup to comply with the new, more stringent emission norms that are slated to hit the country on April 1, 2019, the Royal Enfield has updated the top of the line Thunderbird X series model, the Thunderbird 500X with going to be mandatory feature ABS. This inclusion leads the model pricing to INR 2.13 lakhs (ex-showroom Mumbai), costlier by INR 15,000 over the standard model. While the on-road pricing will be around INR 2.60 lakhs. FYI, the renowned cruiser bikes’ manufacturer has eliminated the non-ABS variant of the same from Indian lineup. 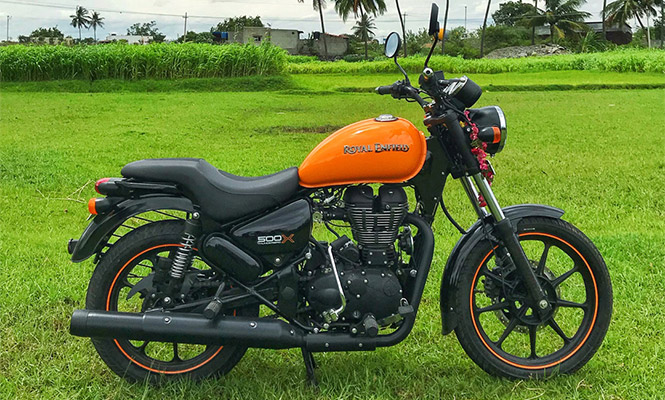 Cosmetically, the Thunderbird 500X is more alluring than the standard Thunderbird 500 owing to the imposition of a mid-life update. The refreshed Thunderbird 500X now gets a new range of bright colours, 9-spoke black alloy wheels with coordinated colour tapes and tubeless tyres. In addition to this, the cycle parts including engine, suspension, exhaust, headlamp cowl and others had been blacked out across the body. Other than this, the headlamp is now equipped with smoked reflector along with it, grab rails and short handlebars are also the new addition.

Beneath the fuel tank, there is a 500cc single-cylinder air-cooled engine with fuel injection. Mated to a five-speed transmission, the motor is capable of developing 27.2bhp and transmitting 41.3Nm of torque. The braking specs comprise a 280mm disc at the front and a 240mm disc at the rear wheel. The dual-channel ABS is now a standard fitment.