Thailand based Saigon Maxspeed employed best of its skill and energy to transform the Yamaha YZF-R15 V3.0 with a host of upgrades as per its own taste. For the customisation, the custom shop not only added some new accessories to the stock motorcycle but also worked on the fairing and bodywork in an effort to make bike more sporty, aerodynamic and aggressive in nature.

Among the customization, the R15 now features a MotoGP styled bubble visor, which helps rider in offering improved aerodynamic riding position at the high speeds. At the fascia, the motorcycle did not witness any serious alteration. It continues with the sharp looking LED headlamps. However, the fairing got updated with a custom-made MotoGP style winglets and bar-end rear view mirrors (only one on the left side) instead of stocked rear view mirrors.

Other than this, there are no significant modifications made on the motorcycle bodywork. However, a host of upmarket accessories such as a newly adjustable brake clutch lever, and aftermarket grips on the fuel tank are fitted to the motorcycle. It will help in holding rider to a position by locking his knee while leaning into the corners. 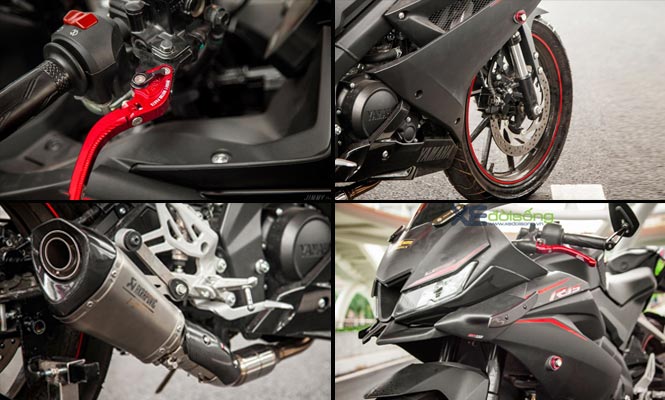 On this heavily customised R15, a performance-focused Akrapovic exhaust setup is also included to boost the performance figures though the exact figures are not known yet. Last but not the least, the rear got a tail tidy kit which helps in reducing extra weight and offering a neat and sporty appeal to the motorcycle.

At the suspension front, the Yamaha R15 V3.0 furnishes USD forks up front and rear monoshock as the standard for the Vietnam spec model. While for the Indian market, the motorcycle is equipped with a conventional telescopic forks suspension setup. Mechanically, the motorcycle continues to get power from the same 155cc, liquid-cooled, single-cylinder engine. The availability of variable valve actuation technology (VVA) promises strong power delivery throughout the rev-range. The engine in question is rated to develop 9.3 PS of maximum power at 10,000 rpm and 14.7 Nm of peak torque at 8,500 rpm.